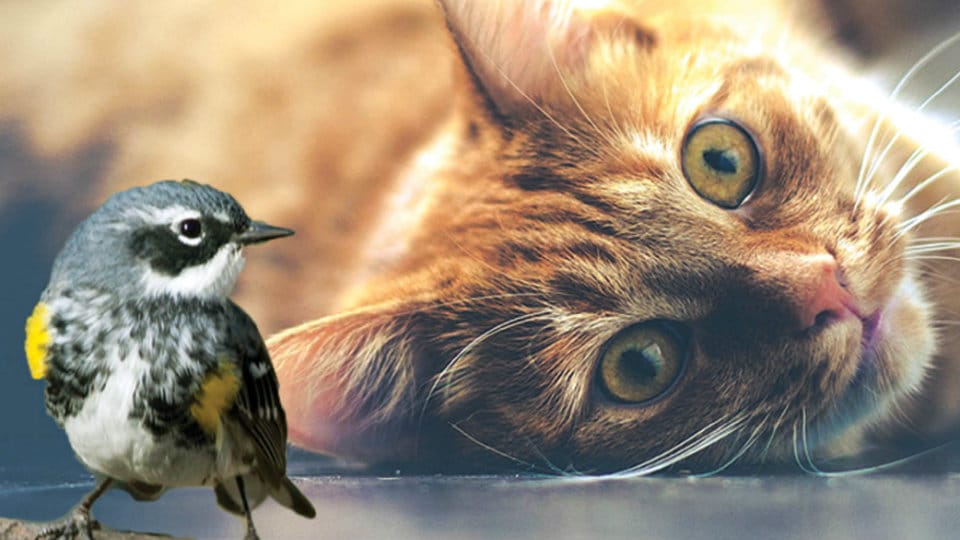 In this week’s Pet Talk, Maneka explains why a cat makes ‘chirp’ sound when it sees a bird

What is the ‘wet dog smell’? How can I  prevent it?

Some breeds of dogs have more oils in their coats than other breeds. The oil is called Sebum and it collects on the hair shaft and follicles to protect a dog’s skin from dehydration. When the dog gets wet, the oil and the water together create a bacteria which causes the unpleasant odour.

This smell can be prevented by proper drying of your dog after bath. Towelling off the dog isn’t enough, the heat and force from a blow dryer penetrates the densest of coats and is a start to getting to the root of the problem. Buy good quality dog shampoos which are specifically designed to get deep into the fur and root out those micro-organisms and their by-products.

What are some of the signs of stress in horses?

Stressed horses can start to lose weight. Since there can be many reasons for this, such as heat stress, parasites and poor feed, it’s necessary to look at all aspects of the horse’s care to troubleshoot weight loss. Stall walking (when a horse walks around a stall, or walks back and forth along one wall repetitively), weaving, cribbing, wood chewing, wall kicking and fence walking, can all be also signs of stress. Yawning, and most horses will do it several times in a row, is a sign that the horse was feeling stressed, and by yawning, is releasing stress. Tooth grinding, without any other dental issues, can also be considered as a sign of physical or physiological stress.

A horse that is stressed can produce copious amounts of manure in a short time. Some may produce very runny manure. Horses will often urinate if stressed. In extreme stress, a horse’s ears will stand up high and twitch.

Why does my cat ‘chirp’ when it sees a bird?

Generally, cat chirping occurs when a cat is interested in, or provoked by, prey — a bird, a squirrel or even a laser dot. It’s more of an excited sound and less of a sound used to hunt. It seems to be universal to cats of all ages and breeds. It is possible that the chattering noises are due to excitement, which your cat might feel at seeing the prey nearby, that it can’t help but make some special vocalisations. Some research indicates that cats chirp as they try to imitate bird calls to make them come closer.

Why does my cat go crazy running around at night?

Because cats are nocturnal by nature, this is when they are most active. Cats spend a lot of time lying around during the daytime, but they do have energy to burn just like any other animal, and the racing around could be a way of burning that off. While younger cats obviously have more energy to burn, even older cats have been known to race around once in a while. Engaging your cats in a heavy play session at night, to exhaust them,  could help them sleep throughout the night.

Running around could also be because your cat is hungry and wants your attention. Feeding your cat late in the night, before going to bed, can help you to keep to the biological schedule of your pet.

Thirdly, it could also be because of an infestation or health challenge. If your cat’s midnight running around includes meows, it could be a result of a bite from a flea. This consequently can result in serious itching that may feel uncomfortable for your cat.

Running around in the middle of the night can also be a result of a skin disorder that worsens at night, and Feline Hyperaesthesia Syndrome (FHS) is a well-known cause of this cat reaction.

This disorder results in an increase in general activity and makes the cat display some aggressive behaviours like attacking its own tail, self-grooming and self-directed pouncing, vocalisation, or pupil dilation for some minutes.

Hyperthyroidism in cats, which results from an increase in the production of thyroid hormones, is also known to cause hyperactivity.

Why should animals be spayed or neutered before adoption?

Sometimes people, who come to adopt, look like normal animal lovers. But they turn out to be breeders who will use the animal as a baby machine. By spaying or neutering the animal, you offer for adoption, you will make sure they go to the correct homes of people who want the animal to love rather than to multiply. You will help control the pet homelessness crisis, which results in millions of healthy dogs and cats being killed each year simply because there aren’t enough homes to go around.

There are also medical and behavioural benefits to spaying. The female will live a longer, healthier life. Spaying helps prevent uterine infections and breast tumours, testicular cancer and prostate problems, which are malignant or cancerous in about 50 percent of dogs and  cats.

Can animals donate blood to each other?

Let us not call it donation, which implies free will. The question is, can the blood of one animal be taken out and given to another. Typically, when blood is taken from an animal, she is typed and checked for blood-borne infectious diseases. Similar to human blood types, there are five major canine blood types, and one is a universal donor, like our “O negative.” The actual process of taking blood is quite simple. It takes about 30 minutes and does not require anaesthesia. Blood is taken from the jugular vein — the large vein that runs along the neck.

Giving blood will not hinder the animal’s normal activities. Though few, the drawbacks of taking blood may include a slight swelling at the site where the blood was taken. However, blood should not be taken from a street animal just because it has no “owner” and is therefore considered dispensable. It should only be taken from healthy, owned, dogs whose owners can feed and look after them.

What do cows eat?

Feeding your cows is the initial, and most essential, part of taking care of them. A cow that is milking eats about 45-kg each day of feed.

This feed is a combination of: Hay, Grain, Silage (grass crops, including maize, sorghum or other cereals made using the entire green plant); Proteins (such as soybean meal), Vitamins (like carrots, leafy vegetables). Legume rich hay will increase calcium and protein content of the cow’s diet. Grain also helps with more energy intake.

Trace minerals, like selenium and copper, are important as well.

Fresh clean water is also a necessity. Be sure that they have constant access to clean water.

In case of Calves, feed them colostrum milk, and as they get bigger, you can start feeding them hay and calf meal, or calf grain pellets, along with their milk. Their rumen is usually functioning well by 10-12 weeks of age.

They can be fed high quality baby calf meals, or pellets, after about five weeks of age.

Avoid giving excessive green grass in the first 6–8 weeks of age to prevent any digestive upsets.

What are two main causes of calf scours?

Scours is a term for diarrhoea; another term that may be applied to this disease is “enteritis,” which means inflammation of the intestinal tract. While cattle of any age can develop diarrhoea, most cases of calf scours occur under one month of age, with the majority occurring between roughly 3 and 16 days of life.

Other causes include: Overfeeding of milk, feeding calf from dirty pails, allowing them to drink too fast and using unsanitary pens.

Calf scours is not a single disease; it is a clinical sign associated with several diseases characterised by diarrhoea. Regardless of the cause, diarrhoea prevents the absorption of fluids from the intestines; also, body fluids pass from the scouring calf’s body into the intestines.

Certain strains of E. coli and Salmonella, invade the deeper layers of the intestinal lining, causing it to rapidly deteriorate.

Generally, this causes release of blood and mucus into the diarrhoea. Calf scours are usually caused by two or more of these pathogens working together.

TREATMENT: Treatment should be directed toward correction of dehydration, acidosis (excess of acid in the blood that causes the pH to fall below 7.35), and electrolyte loss.

Antibiotic treatment can be given simultaneously with the treatment for dehydration.

Dehydration can be overcome with simple fluids, given by mouth, early in the course of the disease.

The clinical signs of dehydration first occur when the fluid loss reaches five to six percent of the body weight.

Fluid loss of eight percent results in depression, sunken eyes, dry skin, and a calf will probably be unable to stand.

A twelve percent loss of fluids usually results in death. Oral fluids, used early in the scouring process, have been quite successful.

Dry electrolyte powders that can be mixed with water for oral administration.

DO NOT use milk or milk replacers, as milk in the intestinal tract makes an ideal medium for bacteria, such as E. coli, to grow.

What is a bloat in cattle?

Bloat is a form of indigestion marked by excessive accumulation of gas in the rumen. Immediately after the cattle consumes a meal, the digestive process creates gases in the rumen. Most of the gases are eliminated by eructation (belching). Any interruption of this normal gas elimination results in gas accumulation or bloat. Fermentation creates gas, and too much gas causes pain and stomach bloating that puts pressure on internal organs. This is very dangerous for cows and many die from it in great agony.

Cows take time to figure out exactly what they are looking at. Any time you are doing something different with your cows, take it slowly so as to let the cow figure things out. Do not make quick, sudden movements, because the cow will startle and panic. A panicked cow takes quite a while to regain its calm. So, you are better off just relaxing and working at the cow’s own pace.