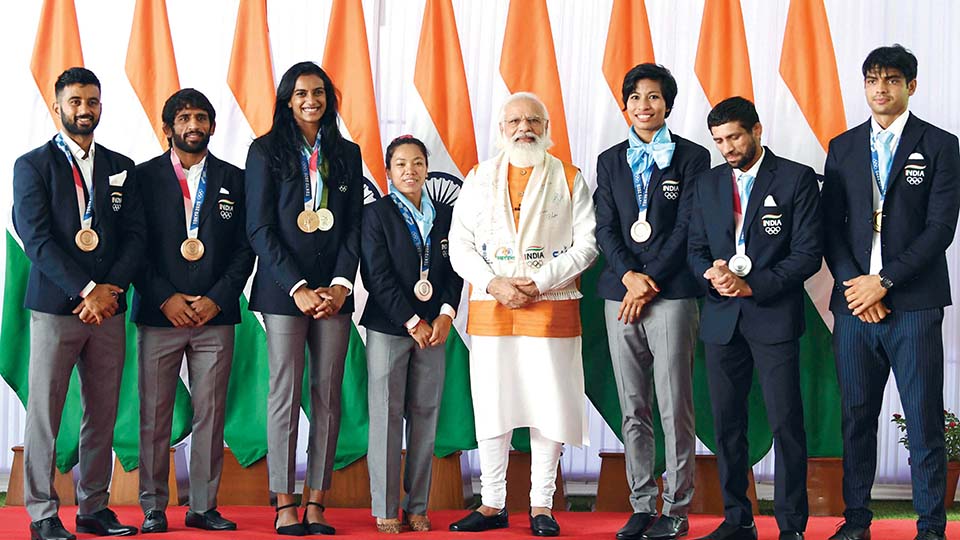 New Delhi:  Prime Minister Narendra Modi on Monday had hosted the Indian contingent of the Tokyo Olympics for breakfast at his residence.

The interaction saw PM Modi sharing ice cream with Bronze medallist P.V. Sindhu and also treating gold medallist Neeraj Chopra with his favourite dish ‘churma.’ However, what caught attention was the small yet inspiring move by PM Modi where he was seen wearing a ‘gumcha’ that had autographs of Indian participants of the Tokyo-2020 Olympics.

The image was tweeted by senior BJP leader and the party’s National General Secretary B.L. Santosh. Tweeting PM Modi’s picture where he can be seen donning the autographed ‘gumcha,’ Santosh remarked that this kind of respect and recognition is what achievers were missing all these days.

Social media users were also quick to notice and hail PM Modi for his inspiring gestures. One of the users tweeted that it is a culture of our India to shower respect on brilliant players and PM Modi represents the same.

Modi had an eventful breakfast session with the champions and also had a special interaction where the medal winners gifted their favourite sports equipment to the Prime Minister.