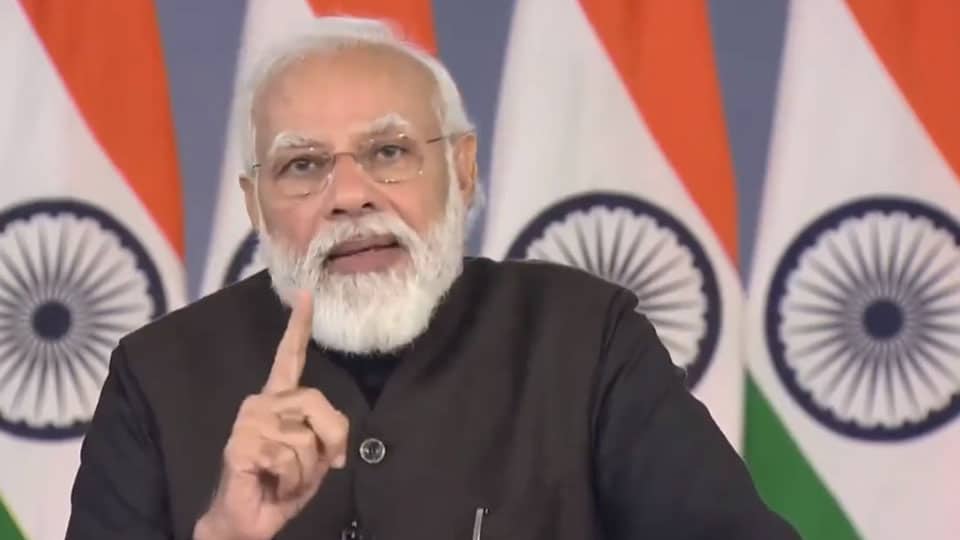 New Delhi: Prime Minister Narendra Modi on Monday appealed to children to become ambassadors of his ‘vocal for local’ strategy to highlight the indigenous and achieve the goal of self-reliance.

Modi was interacting with the awardees of Pradhan Mantri Rashtriya Bal Puraskar (PMRBP) via video conferencing.

“Just as you came forward for the Swachch Bharat Abhiyan, I seek your cooperation in another area, come forward for ‘vocal for local’. Make a list of products at your home that are not made in India. Ask your family that whenever a similar product is purchased next time, it should be a made in India product,” Modi said, adding he firmly believes “the baal sena (children’s army) would wholeheartedly extend support to him.”

The Prime Minister said the credit for the success of Swachchh Bharat Abhiyaan goes to the children who inspired their families and neighbours to make the cleanliness drive a reality.

Modi remembered the glorious history of the freedom struggle and gave examples of freedom fighters like Khudiram Bose, Kanakalata Baruah and Rani Gaidinliu detailing how their exemplary courage at a young age contributed towards the country’s Independence.

“These fighters had made the country’s freedom the mission of their lives at a very young age and had dedicated themselves to it,” he said.

“Another example is the bravery and sacrifice of Guru Gobind Singh ji’s sons! Sahibzadas were very young when they sacrificed their lives with immense valour. Their sacrifices for India’s civilisation, culture, faith and religion is unparalleled,” Modi told the PMRBP awardees asking them to know more about the Sahibzadas and their sacrifice.

The PM also conferred digital certificates to PMRBP awardees for the year 2022 and 2021 using Blockchain Technology. This technology is being used for the first time for giving certificates to awardees.

The Prime Minister digitally transferred cash prize of Rs. 1 lakh to each awardee. This year, 29 children from across the country, under different categories of Bal Shakti Puraskar, were selected for PMRBP-2022.

The Government has been conferring the PMRBP award to children for their exceptional achievement in six categories — innovation, social service, scholastic, sports, art & culture and bravery.

The Prime Minister also hailed the parents and teachers of these children. The awardees will take part in the Republic Day parade like every year.