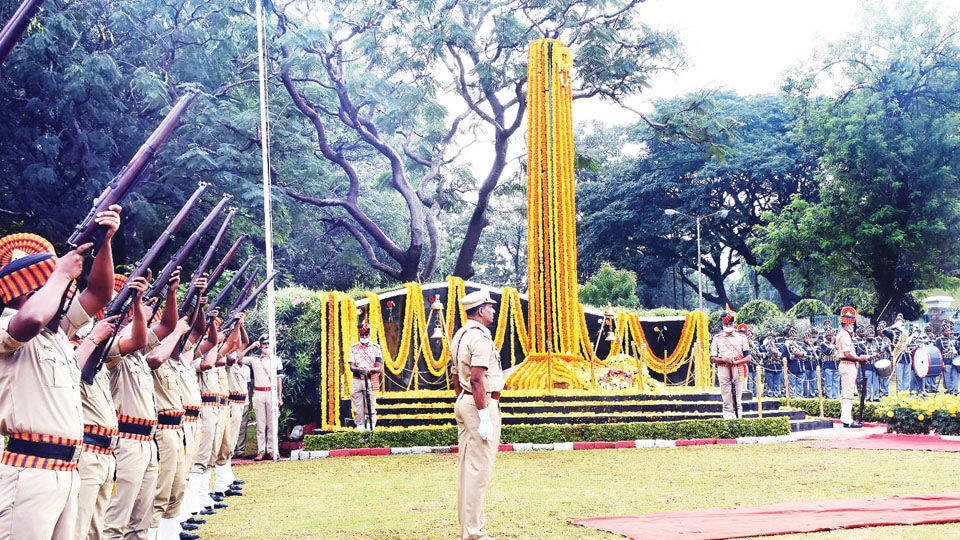 Mysore/Mysuru: “Criminals find ways to escape punishment due to lapses in the procedure. You should investigate well, file charge-sheet and take proper measures by collecting all evidences so that criminals are brought to book. Only then your efforts will bear fruit,” said Principal District and Sessions Court Judge M.L. Raghunath.

He was speaking after receiving the Guard of Honour at the Police Martyrs Day observed by the District and City Police, along with Karnataka State Reserve Police (KSRP) and Karnataka Armed Reserve Police (KARP) where Police personnel, who lost their lives while on duty, were remembered and paid tribute at the Police Martyrs Park located close to the SP’s office in Nazarbad here this morning.

Oct. 21 is observed as Police Martyrs’ Day (or Police Commemoration Day) by Police Departments nationwide as on this date in 1959, a Central Reserve Police Force patrol at the Indo-Tibetan border in Ladakh was ambushed by Chinese forces, as part of the ongoing Sino-Indian border dispute.

“Freedom fighters including Mahatma Gandhi, Bhagat Singh, Jansirani Lakshmi Bai and Lala Lajpat Rai are paid tribute for their contributions in freedom struggle of the country. Likewise, Police personnel should be honoured for their work of maintaining peace and letting citizens enjoy that freedom and live in harmony. It’s a good development that Cops are remembered and honoured by observing Police Martyrs Day,” Raghunath said. Talking further, he said that while soldiers at the borders fight outside enemies, Police work for internal security and deal with inside enemies 24×7. Hence, they too are honoured this way, he added.

Later, Volley Firing was done followed by the observation of two-minute silence. SP Chethan read out the names of 377 Police personnel who have died while on duty across the nation this year, which included 16 from Karnataka.