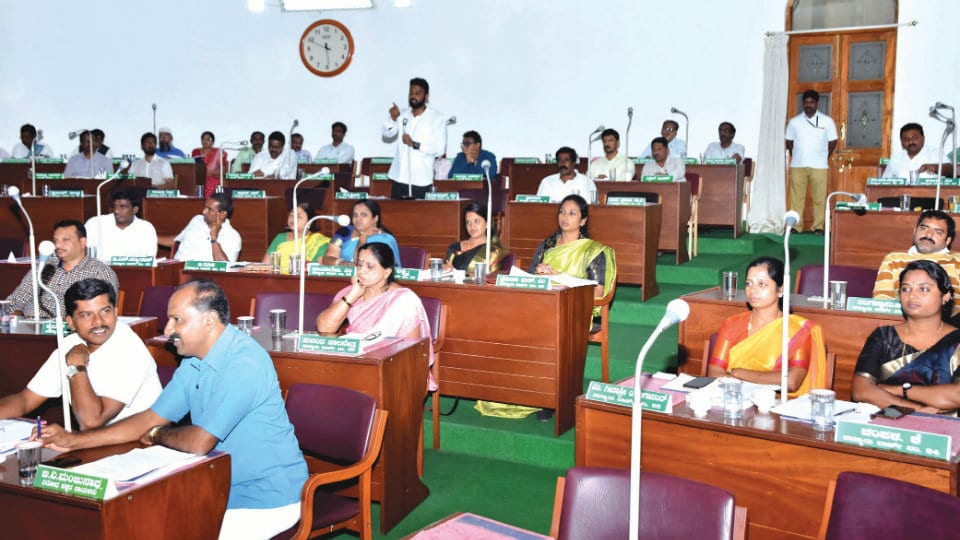 Mysuru: People’s festival, Dasara, is fast approaching and tourists will be arriving in large numbers. But the pathetic conditions of the roads full of potholes and the defunct street lights plunging the city into darkness are something that needs urgent attention. Otherwise, celebrate Dasara in darkness…

This was the unanimous cry of the Corporators cutting across party lines at the Mysuru City Corporation Council meeting chaired by Deputy Mayor Shafi Ahmed (in the absence of Mayor Pushpalatha Jagannath) here recently. This demand of filling the potholes and replacing the non-functional street lights was given a unanimous approval.

Corporators object to Commissioner’s absence: The Corporators took strong exception to the presence of Additional Commissioner K.N. Shashi Kumar who was representing MCC Commissioner Gurdutta Hegde and demanded that he be present. Bowing to the demand, Deputy Mayor Shafi Ahmed adjourned the meeting for 30 minutes till Hegde arrived.

Accidents increase: 30 minutes later when the meeting began, former Mayor Ayub Khan, Corporators B.V. Manjunath, Shanthakumari, S.B.M. Manju, Gopi, Sunanda Palnethra, Prema Shankergowda, Ramesh and others spoke and said that since the last two years the street lights had become defunct and the roads have plunged into darkness. As a result, accidents, incidences of chain snatching and other crimes had gone up. The public were cursing the Corporators. This has to be viewed seriously and urgent action needed to be taken, they demanded.

They had all become like beggars asking for street lights and potholes to be fixed, they said expressing their displeasure.

Responding to this, MCC Commissioner Hegde said that the Government had plans to install LED lights and the contractors concerned had been entrusted the responsibility. However, due to a few conditions, the contractors were refusing to participate in the tender process.

Nearly Rs.15 crore is required to fill the potholes in the city. However, the Government has released only Rs. 5.75 crore and works will be taken up on a priority basis, he said.

Even the contractors had been approached assuring them of clearing their dues on seniority basis but to continue with the work this year. Besides, about 330 Pourakarmikas are being utilised for the special Swachh Abhiyaan. The tenders will be called before Sept.10 and by Sept.20 all works will be completed, he said.