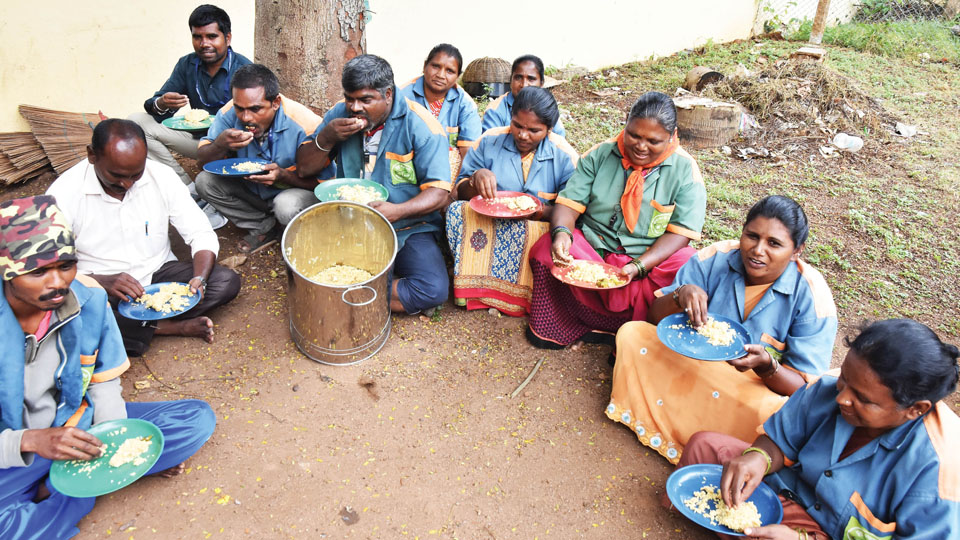 Pourakarmikas eat rice bath for breakfast on all seven days

Mysore/Mysuru: The much-hyped ‘Upahara Bhagya’ (breakfast scheme) mooted and implemented by the Mysuru City Corporation (MCC) to provide breakfast to over 2,400 Pourakarmikas engaged in cleaning work has hit a roadblock. This time it is over taste as the beneficiaries are complaining that there is no taste and variety in the food.

The MCC’s ambitious plan provides free breakfast to all it’s Pourakarmikas. Most of the Pourakarmikas are complaining of health issues after eating the same breakfast on all seven days a week.

Many Pourakarmikas leave home early in the morning for work, mostly skipping breakfast as they do not have time to prepare the same. With cleanliness taking the topmost priority in city, the role of Pourakarmikas in achieving the same cannot be quantified. Hence, the MCC came out with the scheme to provide breakfast to the Pourakarmikas to energise them. But unfortunately, the scheme has been cancelled now due to quality issue and health concerns.

The MCC started the breakfast scheme through Government-run Indira Canteens from Sept. 30, 2018. But the scheme was suspended after the MCC began to receive numerous complaints on the quality and quantity of food served. On Nov. 15 last year, the scheme was relaunched through online tenders.

The tender for providing the breakfast had been awarded to a Hyderabad-based mass caterer Rao Raghuveer Singh Seva Samiti and the MCC is spending Rs. 1.83 crore annually for the scheme. As per the earlier plan, the breakfast menu must include upma, rice bath, idlis, bisi-bele bath, curd rice, tomato bath and lemon rice, to be served on designated days.

But most of the Pourakarmikas are now complaining that they are getting the same rice bath for the whole week.

This ambitious scheme of MCC, which was introduced in November 2019, intended to provide 400 grams of quality and nutritious breakfast everyday between 8 am and 10 am at designated points in all the 65 Wards for all civic workers, including 2,168 Pourakarmikas working in the sweeping and cleanliness section and 238 working in the underground drainage section. As most of these civic workers did not accept the poor quality food that is being served to them, the number Wards receiving breakfast has been reduced to 20 now.

“We have urged MCC health officials to either stop this scheme or give tender to some other good caterers. It would be better if they give us breakfast allowance,” a civic worker said.

READ ALSO  Slaughter houses to be closed on Feb.13

Reacting on this issue, Mayor Tasneem said: “Instead of breakfast, we are not supposed to give breakfast allowance unless the Government clears the proposal. We will further discuss this matter with officials and decide.”