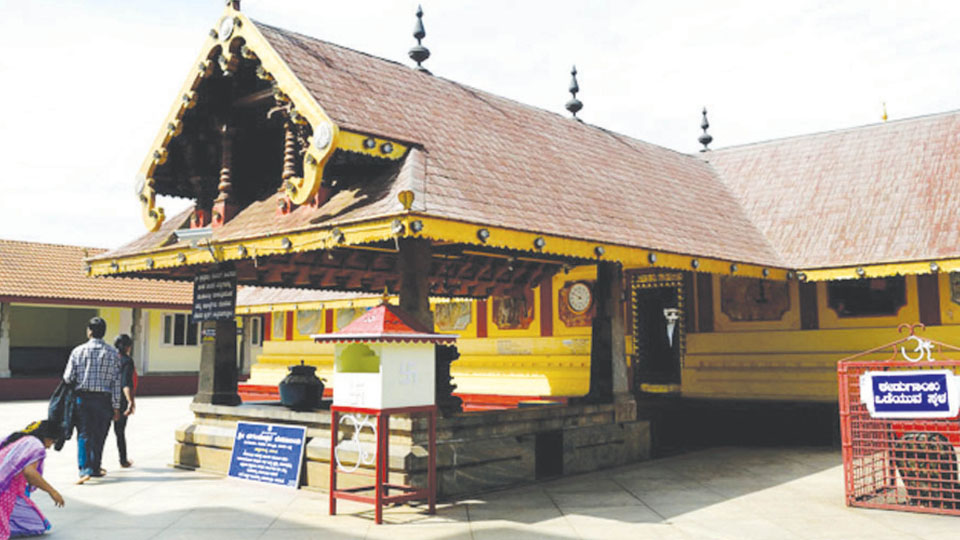 Practices at Igguthappa Temple threatened in the name of renovation

Madikeri: Even as the renovation works of the famed Igguthappa Temple is underway, the temple’s Devatakka family has alleged that the temple practices and traditions have been threatened in the name of renovation.

Addressing a press meet here yesterday, Devatakka Paradanda Subramani said that the renovation of temple steps on the eastern side has been completed.

Maintaining that use of these steps has been banned since ages, he said that the steps will be allowed for use only when someone vows to make a pledge of truth under special circumstances. But some persons are now attempting to allow devotees to use the steps by advocating that these steps are indeed the main entrance to the Temple, which is not at all correct, he said.

Appealing the devotees to enter the Temple through the steps on the north-western side of the Temple, Subramani argued that using the eastern side steps is a deviation from customs and practices that were prevalent all these days.

Clarifying that they were not against Temple works that have been taken up along with the renovation, Subramani said that it is important to safeguard the customs and practices that are being followed for ages.

Devatakka Paradanda Vittal Bhimaiah said that the issue was discussed at a Bhakta Janasangha meeting, during which it was resolved to ban use of steps on the eastern side for entering the temple. Pointing out that the Paradanda family has been entrusted with the responsibility of listing pujas, rituals, festivals, fairs, astrological predictions etc., Bhimaiah alleged that a group was making organised attempts to sideline Paradanda family.