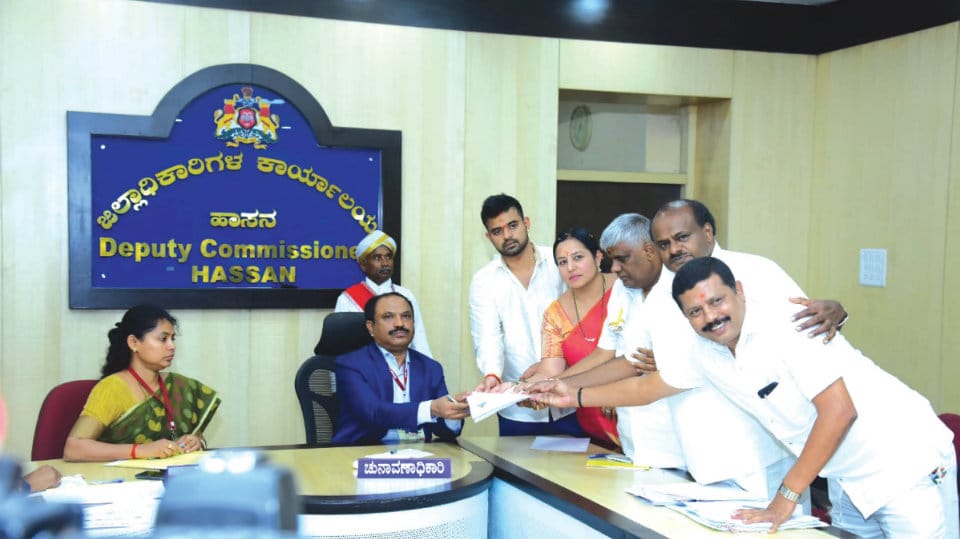 Hassan: Ending days of speculation on will he or won’t he, Prajwal Revanna, son of PWD Minister H.D. Revanna and grandson of JD(S) supremo and former PM H.D. Deve Gowda, filed his nomination as the JD(S)-Congress coalition candidate from Hassan Lok Sabha Constituency, at the Hassan Deputy Commissioner’s office this morning.

Although Deve Gowda, the sitting MP from Hassan, had named his grandson Prajwal as his successor for Hassan LS seat a couple of weeks ago, there was pressure on the former PM from various quarters to contest from Hassan again. However, Prajwal’s nomination today ended all speculations on the JD(S) candidate.

Prajwal filed his nomination at 12.30 pm, in the presence his parents H.D. Revanna and Bhavani Revanna and Paternal Uncle Chief Minister H.D. Kumaraswamy. Prior to the filing of nomination, Prajwal went on a temple run visiting many temples in Hassan city. He marched in a procession from one of the temples to the DC Office amidst a huge gathering of his supporters.

Enroute, Prajwal was garlanded by a huge Apple garland that had 800 fruits.

A strong believer in astrology, Prajwal is said to have signed his nomination paper at a temple and sought the blessings of the deity.

Mysuru District Minister G.T. Devegowda, a host of other local leaders were present.