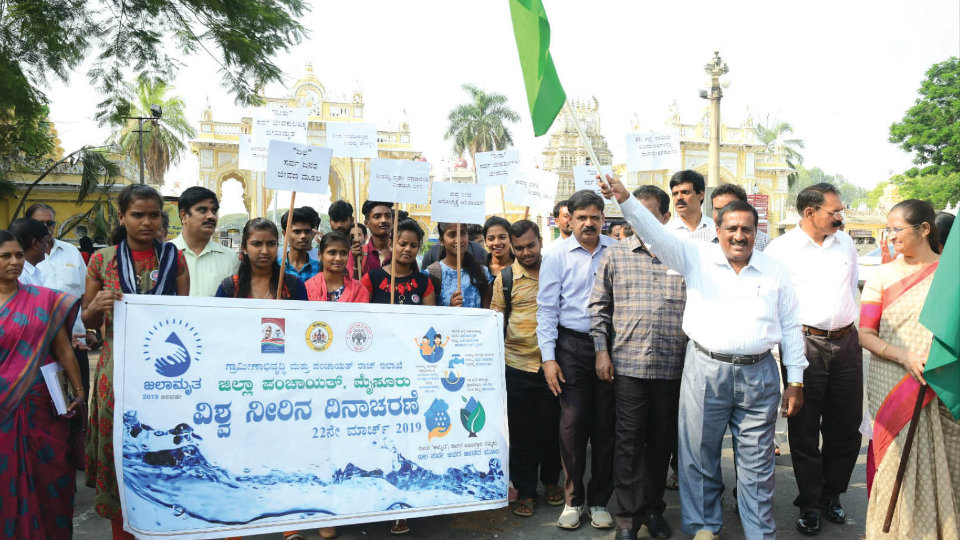 Experts call to conserve water, other natural resources for future

Mysuru: World Water Day was observed by Mysuru Zilla Panchayat by organising an awareness rally and a stage programme in city this morning.

Students of various colleges, who had assembled in front of Kote Anjaneyaswamy Temple at the North Gate of Mysore Palace, took out an awareness rally by carrying placards with  messages on the importance of conserving water.

The stage programme was inaugurated by Judge Vijaykumar Ananda Shetty by watering a plant.

Chief Conservator of Forests (CCF) Ambadi Madhav, who also spoke, questioned how many people were getting pure water? And said that there was of water everywhere and   for everyone including plants and animals.

Stating that the temperature was soaring high causing a lot of problems, he said that the forest cover, which should be 33% as per law is only 18% and added that the Forest Department was encouraging the farmers to grow more trees of their choice in their land for which the department would supply the saplings.

Water expert Ravikumar, speaking on the occasion, said that earlier, people were treating water and God which is not being done these days due to the negligent attitude resulting in water getting polluted and being wasted.

He said that civilization began near water sources and temples were found only on river banks because to protect water, which was considered as God.

Stating that there were about 46,000 lakes in the State, which has come down drastically, he said that there is a need to protect lakes for the future.