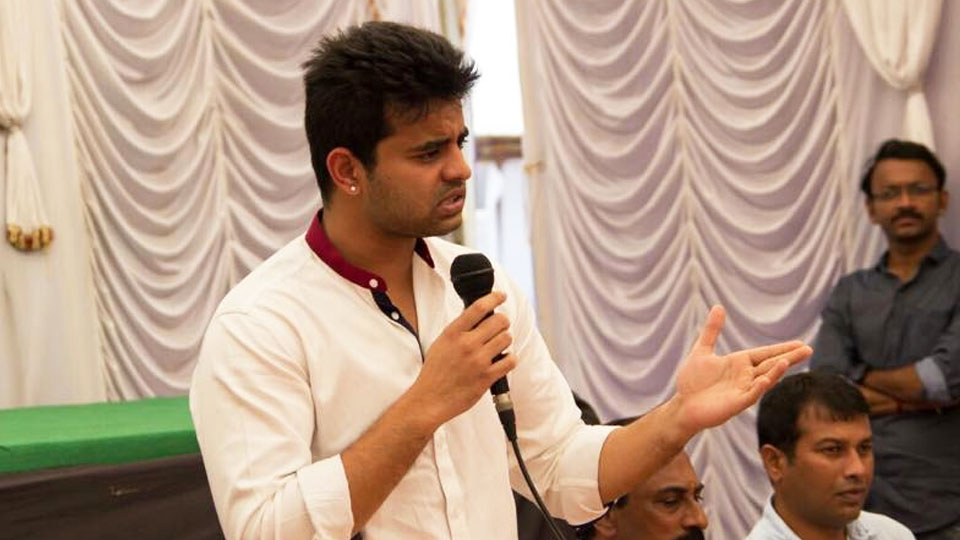 Hassan: Maintaining that he is not a Prime Ministerial candidate of the Opposition and also will not contest the 2019 Lok Sabha polls, JD(S) supremo and former PM H.D. Deve Gowda has said that his grandson Prajwal Revanna, son of PWD Minister H.D. Revanna will contest the Lok Sabha polls from Hassan.

Speaking to press persons at his residence in Hassan yesterday, Deve Gowda said Prajwal will contest the 2019 LS polls from Hassan.

Claiming that he had said much before that he would not contest the LS polls anymore, the JD(S) supremo said Prajwal has been active in the JD(S) for the past couple of years and he (Prajwal) has a good future in politics, considering is organisational skills. Referring to the longevity of JD(S)-Congress coalition Government, he said that nobody can destabilise the Government.

Asserting that the coalition Government would continue beyond the LS polls, he alleged that the BJP was making continuous efforts to destabilise the government.

Stating that the JD(S) would fight the urban local bodies election alone, Gowda however said that his party will have a friendly fight with the Congress, while the sole aim of the JD(S) was to defeat the BJP.

Accusing the BJP of unnecessarily targeting CM H.D. Kumaraswamy, Deve Gowda said that the JD(S) is yet to decide on entering into a pre-poll alignment with the Congress for the Lok Sabha polls.