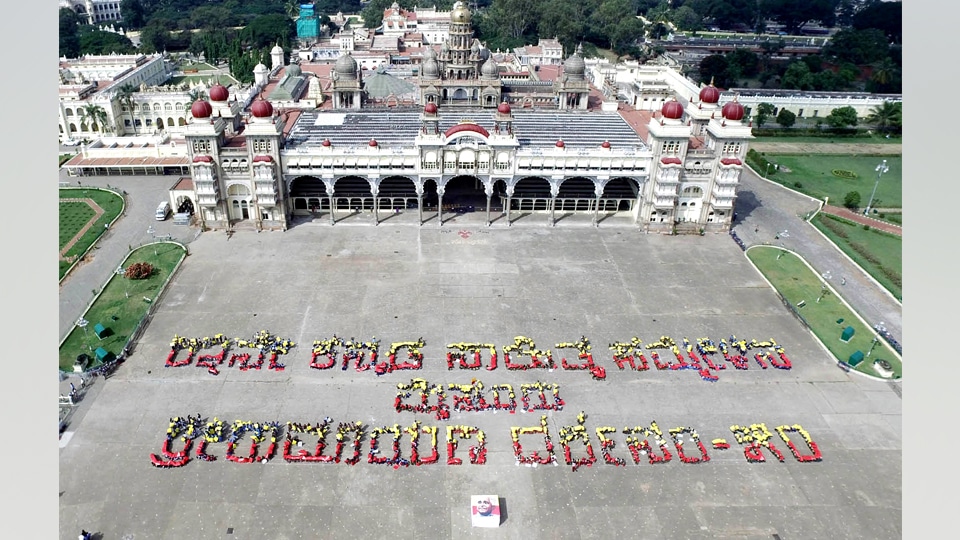 The students stood in formation holding yellow and red colour cards above their heads (symbolising the colours of Kannada flag) in the spacious portico of Mysore Palace this morning as two drone cameras recorded the event.

Today’s event was a publicity campaign for the forthcoming Kannada Literary Fest and to commemorate the 50th year celebrations of Rashtrakavi Kuvempu’s Sri Ramayana Darshanam being awarded Jnanpith in 1967.

The publicity event was organised jointly by the District Administration, Mysore Palace Board and the 83rd Kannada Sahitya Sammelana Publicity Committee.

Speaking after launching the event, Deputy Commissioner D. Randeep said that the event was being recorded using drone cameras and the videos and photographers would be uploaded onto social media networks which can be accessed by the public.

The Administration hopes that this event would help garner publicity for the Kannada Literary Fest, which is scheduled to be held at Maharaja’s College Grounds in city from Nov.24 to 26.

This formation of Kannada words by students, which was  scheduled to begin at 8.15 am, was delayed and began only at 10 am. The students stood in their designated places holding their respective coloured cards and completed the formation  by 10.30 am.

The students were guided by BEOs of North and South Zones under the supervision of the Dy. Director of Public Instruction (DDPI) Manjula.

After the event, the students were served light refreshments comprising buns, biscuits  and bananas.

It may be recalled that the Mysore Palace had also hosted the ‘Longest Yoga Chain’ formation on June 19 this year, as a prelude to the International Yoga Day on June 21.