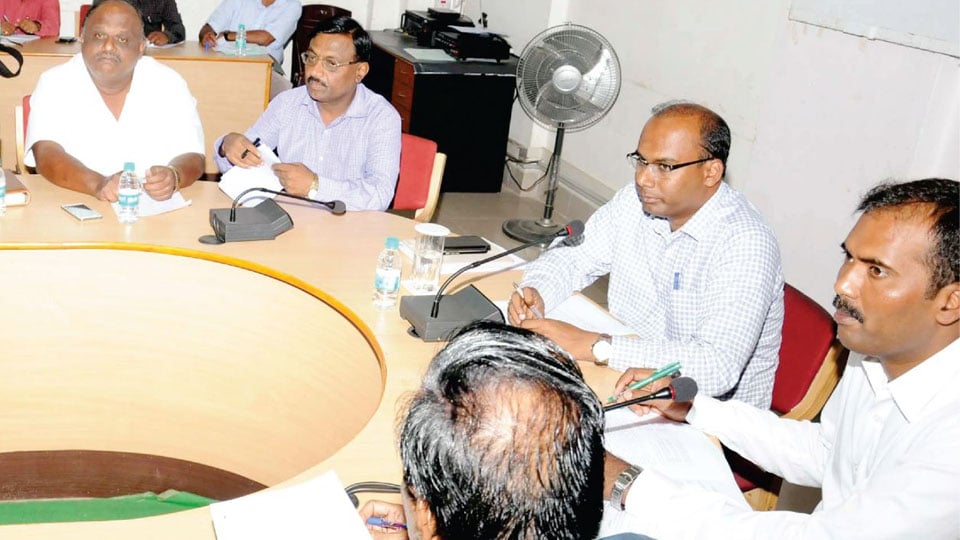 Mysuru: Deputy Commissioner D. Randeep chaired a preliminary meeting of officials involved in the preparation for the 71st Independence Day celebrations to be held on August 15 at the Bannimantap Torch Light Parade Grounds. The meeting was held at his office, here yesterday.

Plastic flags banned: He instructed the officials to see that the national flag is clean; there is no mistake in choosing the correct flag colours, see that it is not hoisted upside down and a complete ban on usage of plastic flags.

A few of the social activists who participated in the meeting pointed out that last year plastic flags were being sold in Shivarampet and other areas. Randeep asked the Corporation officials present to visit Shivarampet and take action against the shopkeepers selling plastic flags and to even seize them if they find it.

E-toilets: A few of the members said that last year too when the celebration was held in Bannimantap grounds, the participants and the spectators found it very difficult as the toilet facilities was very poor. Randeep asked the MUDA officials present to look into and see that at least 10 e-toilets each for both men and women is built. He also directed them to see if permanent toilet facilities can be constructed in the Bannimantap grounds.

Rehearsal: The rehearsals will be held on Aug. 11, 12 and 13 and for the participants to change their costumes, he asked the officials to put up separate tents.

Compulsory attendance: The officials of all the Departments must compulsorily be present on Aug. 15 at 8 am at their respective offices to celebrate the I-Day. Then all of them have to move to Bannimantap Grounds to participate in I-Day celebrations. They also should sign the attendance register kept for national holidays, said the DC and asked the officials to participate in the cultural programmes organised by the Kannada and Culture Department at Kalamandira in the evening.

Bus facility: He also asked the officials to see that bus facilities are organised for the public on Bannimantap Grounds route.

Later, addressing media persons, DC Randeep said that the Dasara this year will have a new-look as additions are being planned for the Dasara procession. Plans are afoot to invite cultural troupes from other States and also to get international cultural troupes. Just like in Republic Day Parade, there are thoughts to include NCC cadets in the procession. The programmes in the Town Hall will also be included this year as the open-air theatre is getting ready, he said.