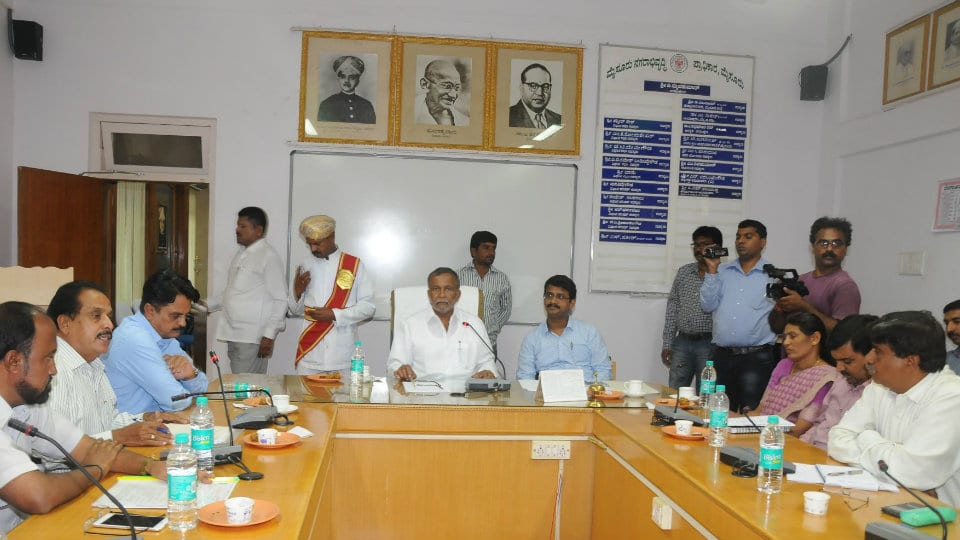 Mysuru: Private layout developers and house building cooperative societies that come under Mysuru Urban Development Authority (MUDA) limits, have expressed stiff opposition to the move of the MUDA to share the land in a 50:50 ratio.

In a meeting held yesterday at the MUDA office on JLB Road here which was chaired by MUDA Chairman D. Dhruvakumar, the Presidents and Secretaries of all the private layouts and societies refused to the MUDA’s proposal.

Earlier, MUDA Commissioner Dr. M. Mahesh said that a total of 1,238 acres of land in 12 villages belong to Private Builders Co-operative Societies. Amidst this spread of land,  a few acres also belongs to MUDA. Hence, the 50:50 ratio would not only benefit MUDA but also the private land developers.

If they accept this proposal, the layouts would be set up within a year. Right from the land conversion process, khatas, title deed, deed registration, the land would be developed and MUDA would take full responsibility to do all these, he said.

Madhuvana House Building Co-operative Association President D.T. Prakash said that about 40 acres of land in Srirampura and Kergalli bought in 2006 was acquired by MUDA. Later, the Government had relinquished this land. After this, we had to wait for another five to six years for CDP approval. Because of this new proposal of 50:50 ratio, we are not able to give sites to our members who have paid money. Hence, such societies should be excluded, he said.

Mysore District Employees House Building Co-operative Society President J. Puttaswamy said, according to this new proposal only 50 per cent of the members could be given sites. The remaining 50 per cent who will be deprived of the sites will approach the courts, hence we oppose this ratio system, he said.

House Building Co-operative Association President T. Rangappa said, the members who are waiting for a long time for the sites are taking us to task. Hence, leave us from this proposal.

The Presidents of various other associations including R. Ramegowda, K.N. Nagesh, H. Ramesh refused to part with their lands.

Reacting to this, Commissioner Dr. Mahesh said that there was no pressure for them to accept the proposal. If they voluntary accept it, then everybody would be benefited. Other MUDA officials were present.

READ ALSO  ‘Bit of land’ near your house to cost less now: MUDA revises prices of ‘bit of land’

MUDA Chairman D. Dhruvakumar reacting to the opposition by the co-operative societies and land developers, said that a suitable decision would soon be taken after a discussion in the MUDA meeting.

He told the people who participated in the meeting that he understood their problems and would take a decision in this regard without affecting their interests. There are lakhs of people waiting for sites from MUDA, if we co-operate, then it would benefit the site aspirants too, he said.