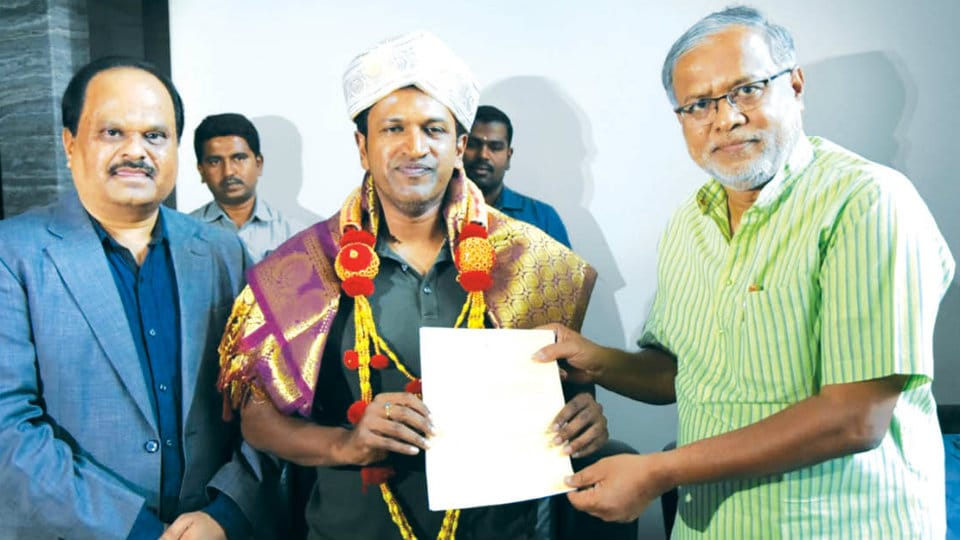 Bengaluru: Sandalwood actor, ‘Power Star’ Puneeth Rajkumar has been nominated as Development Ambassador to the border district of Chamarajanagar, the office of the district in-charge Minister said on Saturday.

Chamarajanagar district in-charge and Primary and Secondary Education Minister Suresh Kumar met the actor at his residence and invited him to be the Development Ambassador on behalf of the district administration, an official release said. Puneeth is the youngest son of Kannada matinee idol Dr. Rajkumar and the family hails from Chamarajanagar district. The proposal was made by Chamarajanagar Deputy Commissioner, Dr. M.R. Ravi, who wrote to the actor requesting him to be the Development Ambassador.

‘The appeal addressed to Puneeth Rajkumar drew attention to the current status of Chamarajanagar district that is rich in culture and tradition. The district is home to Male Mahadeshwara Betta (M.M. Hills), Biligirirangana Betta (BR Hills) and Himavad Gopalaswamy Betta,’ said Ravi, urging the actor to help take forward the vision to develop the region.

‘Puneeth’s functioning as Ambassador will quicken the pace of development in sectors like tourism, industries among others,’ said Suresh Kumar.

‘The district administration has plans for comprehensive development of the region besides taking steps for conservation of natural resources, environment and wildlife, and beautification of towns and urban areas,’ said Ravi.

There are plans to launch a literacy drive to cover nearly 2.5 lakh people and also take up industrialisation of the region to help generate jobs.

Accepting the district administration’s invitation, Puneeth said he felt privileged to work as Development Ambassador of Chamarajanagar district, where his father, thespian actor Dr. Rajkumar was born and spent initial days of his life. “I have an emotional connection with Chamarajanagar district and have plans to organise a programme there in memory of my late father,” he was quoted as saying in a release.

READ ALSO  Father-son die after tree falls on their car

The actor was felicitated with a shawl and Mysuru Peta on the occasion.