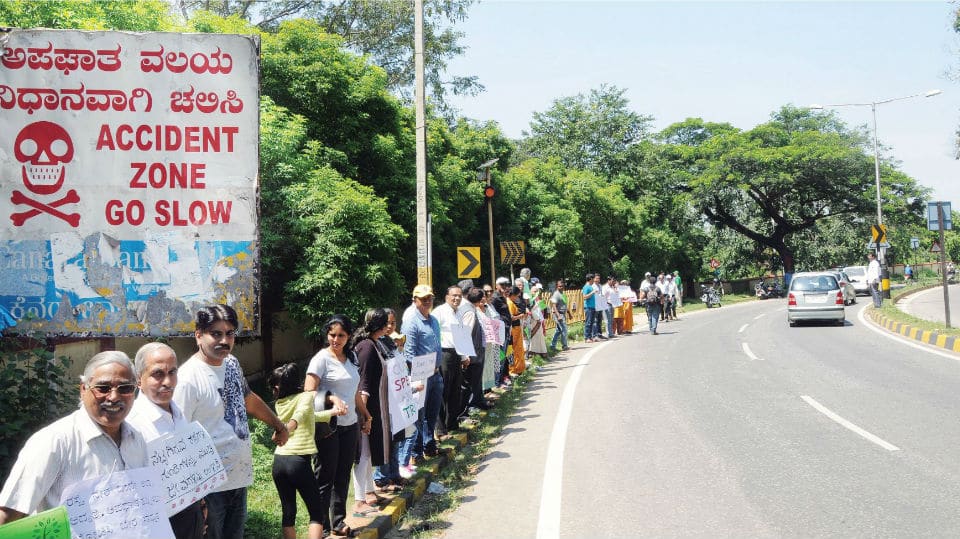 Mysuru is ablaze for a public cause. The notable feature of the scene that emerged this week on the road stretch from Kalamandira to the corner a few yards after the entrance to Jaladarshini Guest House was that the 1,000 plus citizens, youngest being a three-year-toddler and the most elderly being a couple of years shy of 90 years set the city ablaze without fire or smoke in a metaphoric sense. Readers of distant regions not familiar with the goings on may be at a loss to grasp the background to the event that may prompt one to liken it to the legend of fight between David and Goliath. This time, the administration has unwittingly donned the role of mighty Goliath. The battle has just begun and the coming days may see the exact drawing of the battle lines.

The world at large, including the city’s passive supporters, may have to be made aware that the curve-straightening project over just about 500 meters of road length has been planned to swallow twelve crore rupees of public funds by you-know-who. Even unlettered lay-people-on-the-street can be heard talking in their circles about the elected representatives in seats of power and the babus in the entire hierarchy of bureaucracy as the share holders of the booty.

Intellectuals of the ancient times when giants like Plato lived and their counterparts of later eras to this day may have bestowed dignified meaning to the term politics portraying its players in glory. But a seasoned Kannada littérateur, speaking at a public function the other day in the city has apparently toed a vastly different line by portraying politics as an enterprise to plunder public funds, a view that is sure to be appreciated by all except the offending fraternity as most appropriate.

People at large are reading statements by the elected representatives themselves with amounts running to several thousand crore rupees plundered by their cohorts donning the badge of rulers in some years and opposition in other years. The naive among the citizens are wondering about where the plunderers are stashing their monetary loot, in addition to landed property and real estate. They will never get to know!