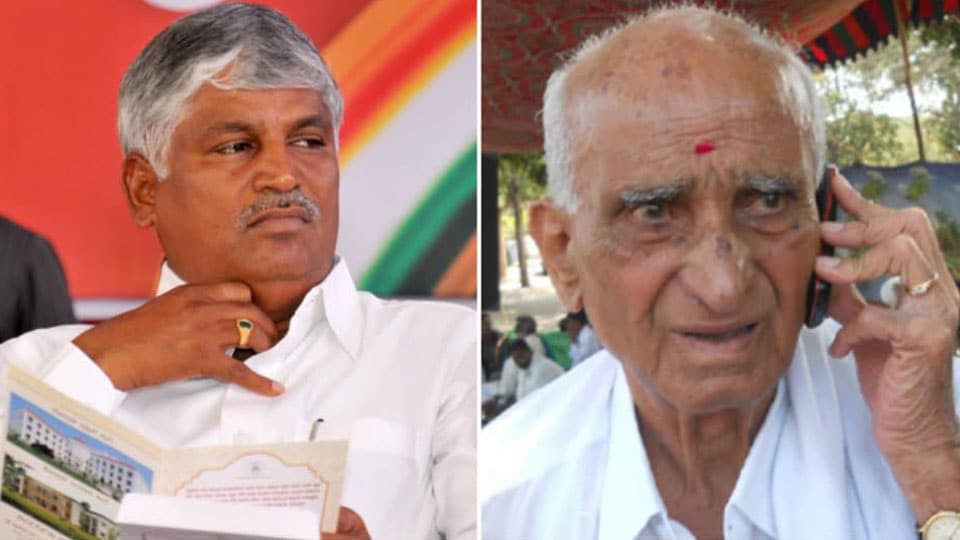 Mandya: Amidst the political heat and dust in Mandya that is witnessing high-profile battle between coalition candidate Nikhil Kumaraswamy and Independent candidate Sumalatha Ambarish, a controversial audio clip has gone viral.

The clip contains a conversation where veteran Congress leader and Gandhian G. Madegowda is seeking money from JD(S) Minister C.S. Puttaraju for the election expenses of Nikhil. The clip has led to a political storm.

The one-minute-55-second clip has been widely shared and aired on social and electronic media and is said to have been recorded a couple of days ago. In the clip, Madegowda, a former Congress MP, allegedly asks Puttaraju, who represents Melukote Assembly segment in Mandya, to hand over the money to his son Madhu Madegowda, a former MLC. Madegowda is allegedly heard saying his supporters in Maddur taluk were demanding money and that he doesn’t have any money of his own to give them.

“As you know, Minister D.C. Thammanna (JD-S leader) has already been distributing money to his supporters. We have to give money to our supporters. My son will start his campaign and you have to talk to the CM  and arrange the money,” Madegowda allegedly tells Puttaraju. A voice, purportedly that of Puttaraju, promises Madegowda that the money would be supplied.

“Since Nikhil is a coalition candidate, it is the responsibility of JD(S) leaders to provide us the money to bear poll-related expenses,” Madegowda said. “What is wrong in asking a JD(S) Minister for money? Who can contest polls without spending money? I’m not bothered if the audio clip brings me a bad name as I have done nothing wrong.”

He said no one could contest elections without spending money, including PM Modi. “The boys ask me for money to arrange coffee, breakfast and liquor. It is common nowadays, and so I asked for the money,” he said.

Meanwhile, CM Kumaraswamy maintained that there was nothing wrong in Gowda seeking money. Addressing a press conference in Udupi, he pointed out that the Election Commission of India itself allows candidates to spend Rs. 70 lakh for election purposes in a Parliamentary Constituency.

He alleged that reporters of a private TV channel had posed as Congress workers to conduct this “sting operation”. “They have unnecessarily brought down the reputation of a senior person such as Madegowda. Is this news? Nothing will come out of it,” he said.

Even C.S. Puttaraju admitted that Madegowda has asked him for money. “This is not the money to bribe the people but the money is a part of Nikhil’s electioneering expenses. That is why I agreed to arrange the money,” he said.