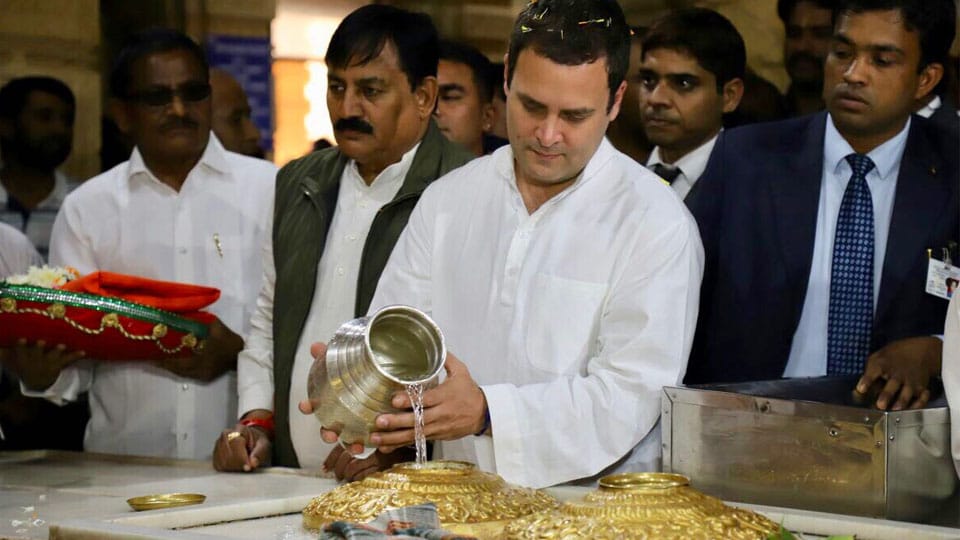 Rahul Gandhi to visit temples and Mutts in State

Bengaluru: With the Karnataka Assembly polls fast approaching, AICC President Rahul Gandhi will undertake a temple run in the State, visiting temples and Mutts in the coming days. Rahul Gandhi in the run up to Gujarat Assembly polls recently, had visited many temples in Gujarat and the Assembly elections result seems to have inspired the newly-elected Congress President to do the same in poll-bound Karnataka.

Speaking to press persons here yesterday, Energy Minister D.K. Shivakumar, who is also the KPCC Working President, said that Rahul Gandhi will visit several prominent temples and Mutts during his poll campaign in the State.

Maintaining that Hindu temples were not limited to one party alone, Shivakumar, with  directly referring to the BJP, said that one party was out to take political advantage over temple and        Mutt issues.

Claiming that the Nehru family and Sringeri Mutt have a long relationship, he said that Rajiv Gandhi used to frequently visit Sringeri Mutt and as such there was nothing special about Rahul Gandhi’s probable visit to the Mutt.

Asserting that the Congress would return to power in the forthcoming Assembly polls, Shivakumar said that the Party’s own surveys had been favourable to the party.

Explaining the development works taken up by the Government in Ramanagaram district,  he said that sitting Channapatna MLA C.P. Yogeshwar, who has parted ways with the Congress and joined the BJP, would not certainly win the polls this time.

Stating that many leaders from other parties were waiting to join the Congress, the Energy Minister said that Kudligi MLA B. Nagendra was one such leader and many others would follow him.