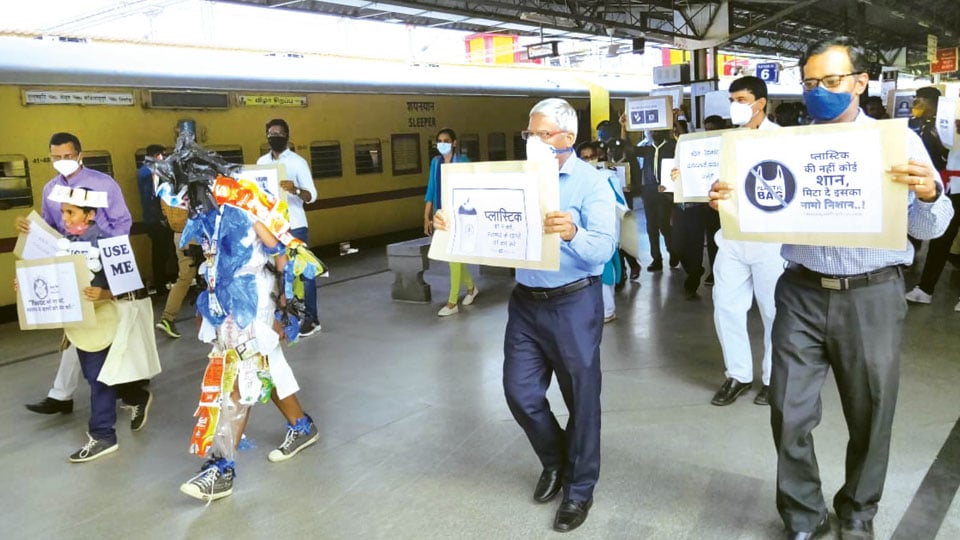 Mysore/Mysuru: Mysuru Division of South Western Railway (SWR) held a special drive at Mysuru Railway Station here on Tuesday to highlight the consequences of plastic use.

As part of this campaign, the passengers were screened for plastics inside the Railway Station premises and inside trains. Awareness was created on the harmful effects of plastic use  and discipline to be followed for non-use of plastics with specific attention on plastic carry bags.

On this occasion, a nukkad natak (street play) was also staged by Bharath Scouts and Guides and Railway staff on plastic use.

Devasahayam explained about various programmes the Division has planned in the next two months and expressed confidence that sustained campaign would bring about perceptible change on ground.

The frontline staff has been made responsible for implementation of the ban as mandated by the National Green Tribunal (NGT). Carrying of plastic bags and plastic items inside Railway Station premises and trains will not be allowed and fine may also be imposed on violation of Government orders, he added.

The programme was held following the State Government’s ban on bags, banners, cups, plates, flags,  spoons and sheets made from plastic and items made out of thermocol in Railway Station premises and in trains.