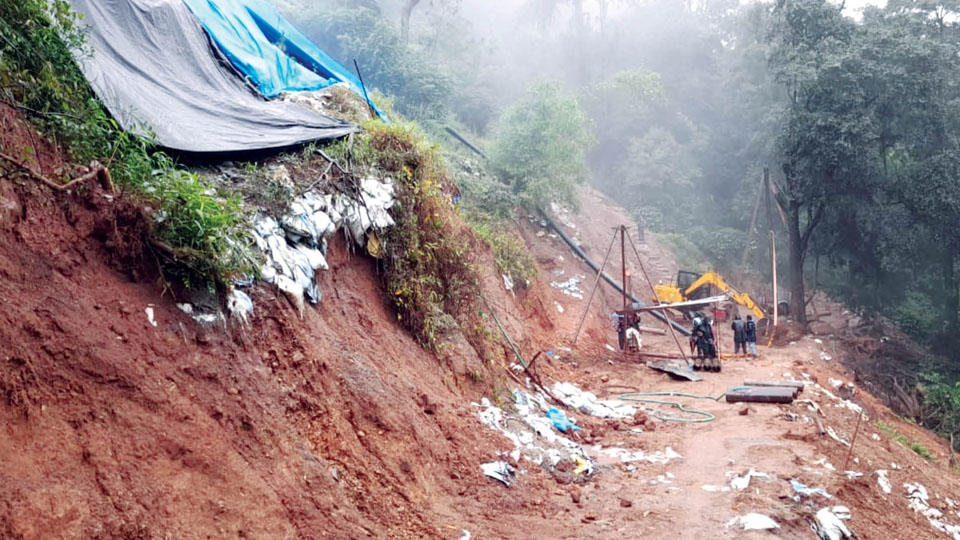 Rain fury throws normal life out of gear in Kodagu

Madikeri: Normal life has been thrown out of gear due to incessant rains in Kodagu district since the last four days. The rainfall has intensified with electricity lines and telephone cables snapping at many places and landslides have been reported at a couple of places including  Akashvani Madikeri.

The rain claimed its first victim when a physically challenged man was washed away at Avvandoor Village in Madikeri Taluk last evening. The victim, 70-year-old Chinnappa (Bobby) was trying to cross a rivulet that was in spate with heavy water flow. His body has been fished out today at a distance of 200 metres from the place where he was trying to cross over.

The monsoon has picked up now like the last three to four years and it did not rain much during the actual rainy season in June. The late and relentless heavy monsoon has renewed the threat of floods and landslides. Rivers Cauvery and Lakshmanatheertha and all other streams and rivulets are in full spate, threatening the inhabitants on the banks.

On a positive note, the Kootupole Mini Dam that supplies water to Madikeri Town has become full and the barrages that hold water have been removed. As such, water is flowing in full force and this is the same water that flows in the form of Abbey Falls.

Triveni Sangama — a confluence of River Cauvery, Kannike and Sujyothi — at Bhagamandala has been completely submerged. The minor bridge over Cauvery near Balamberi in Murnad has been submerged. Six families were evacuated following a minor landslide at Talattamane on Madikeri-Mangaluru road. A landslide occurred in the same location way back in 2018. Though the work on the protective wall was in progress, due to rain the soil gave away and the wall has started caving in.

A mudslide near Madikeri Akashvani tower in Madikeri has triggered panic among the residents. They said that the huge tower has been installed unscientifically near the edge of a road and due to water seepage, the soil has become loose. Kushalnagar, Guhya, Karadigodu, Siddapura and Nelyahudikeri regions are facing the threat of floods this year as well and the residents of the banks have to be shifted to safer places.

Meanwhile, the Karnataka State Natural Disaster Monitoring Centre (KSNDMC) has predicted widespread moderate to heavy rains in Kodagu in the next couple of days with very heavy to extremely heavy rains in isolated areas.