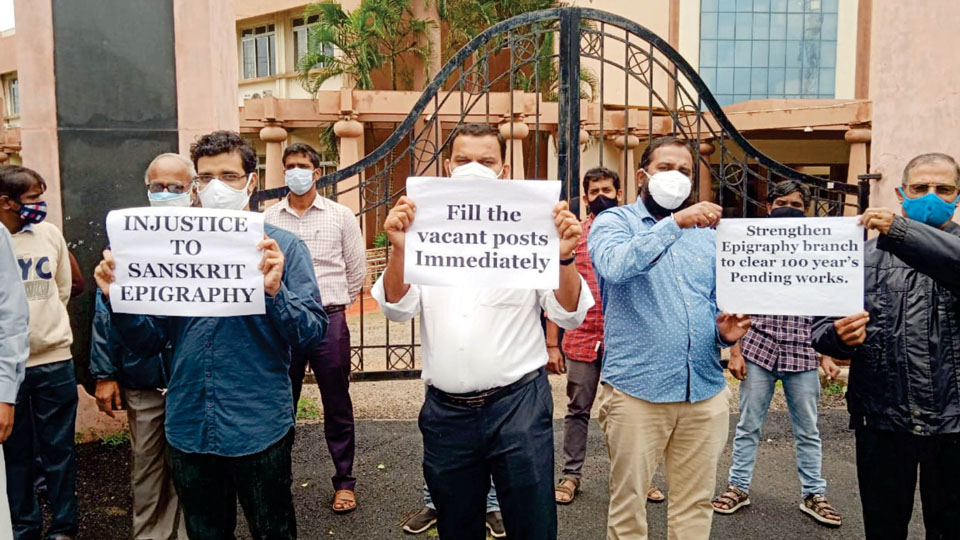 Mysore/Mysuru: Epigraphists of the Epigraphy Branch of Archaeological Survey of India (ASI) staged a silent stir in front of their office at Sankranthi Circle in Hebbal here this afternoon to register their protest against the restructuring of the ASI.

A similar protest is being staged across the country today on this issue. The staff members contended that the restructuring has given a short shrift to the epigraphists and some of the existing posts have been surrendered.

As many as 100 posts have been abolished. Their representations to the authorities to highlight the importance of epigraphy in the study of India’s history had been ignored, the epigraphists stated.

In the new scheme of things, there was more importance to horticulture and gardening rather than deciphering the inscriptions and publishing them so as to fill gaps pertaining to the country’s past, the protestors said.

As many as 70 posts have been created to recruit horticulturists including 55 Horticultural Assistants. But not a single post related to epigraphy has been notified, they said.

They pointed out that there are only five epigraphic assistants for field survey and deciphering the inscriptions in the whole country. The headquarters of the Epigraphy branch was situated in Mysuru and its regional offices were located in Nagpur, Lucknow and Chennai.