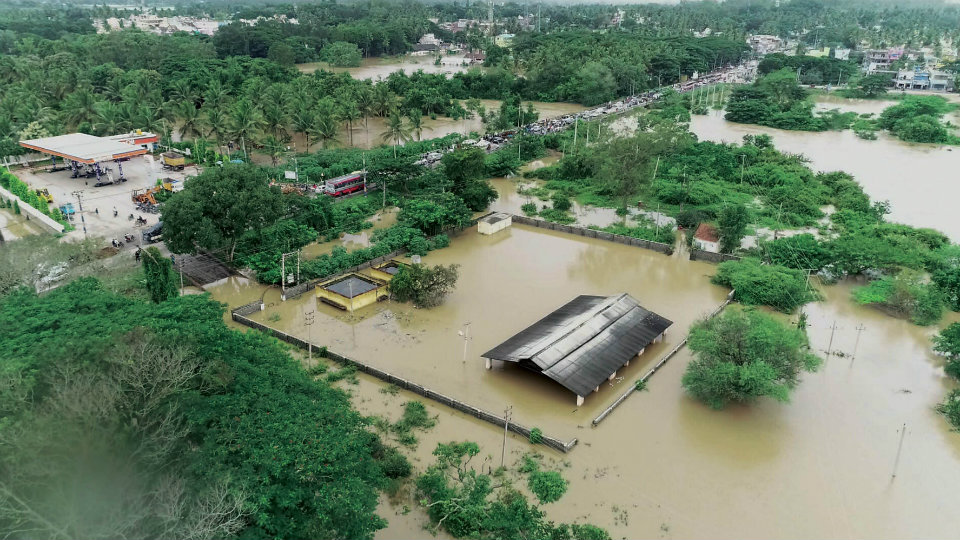 Mysuru-Nanjangud Highway still under 5-ft of water; another life lost in Hunsur

Mysore:  Rainfall in Mysuru, Chamarajanagar and Kodagu seems of have receded but fury continues to haunt people in all these three districts. The death toll has increased over the past couple of days with rescue workers still continuing to shift people to secure places and relief camps.

The rain fury claimed yet another life in Hunsur with a 36-year-old succumbing to injuries after the wall of the house she was residing collapsed yesterday. Meanwhile, the inflow to Kabini and KRS reservoir has increased and the authorities are releasing more water into the rivers.

Mysuru-Nanjangud National Highway 766 still continues to be closed for vehicular movement with 5-ft water flowing over the bridge. The Police have install barricades on the Highway to prevent vehicles from entering the road. Around 75 per cent of Mallanamoole Mutt, located on the back of River Kapila, has been submerged.

The Chamarajanagar District Administration has also banned the entry into Hogenakkal Falls as a precautionary measure. People living near the banks of the river have been shifted to a safer zone.

Rainfall in Mysuru district may have receded but the fury continues to haunt residents especially in Hunsur as Lakshmana Tirtha continues to flow in full spate for the past 4-5 days.

Many layouts in the taluk have been waterlogged leaving the residents in misery. The authorities have shifted more than 100 families to relief centres. Areas such as Rahamath Mohalla, Dhavani Beedi, Brahmanara Beedi and Nandini Layout are the most affected areas in the town.

The authority also evacuated 40 families from Rahamath Nagar. Vehicular movement was restricted on the old bridge of the town as a precautionary measure. Hangodu Road has also been submerged.

Overflowing of Lakshmana Tirtha has also inundated agricultural fields located on the either banks of the river. Meanwhile, the rescue workers were able to save four people who were stuck in one of the farms in Belthur village in the taluk.

Rains in Hunsur claimed yet another life after a woman was killed in Ballehahalli as a house collapsed on Saturday. Mubeena (34) is the deceased. She was living in the village alone after the passing away of her parents. Mubeena, who was stuck in the debris, breathed her last while being shifted to a hospital.

Just a couple of days back Ganesh (36) was killed when a house collapsed at Veeranahosahalli in the taluk.

Eshwar Khandre interacted with the flood victims and promised get the relief funds released from the State Government as early as possible. He also promised to help people in his individual capacity.