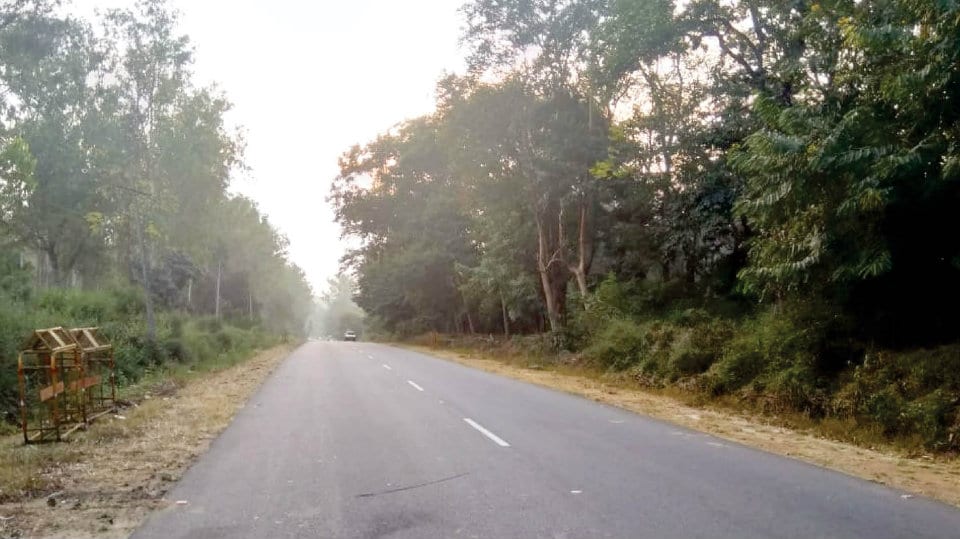 Widening of NH 275 between Kushalnagar and Sampaje: Public opinion builds against Project

Massive rally in Madikeri on Dec. 8

Mysuru/Madikeri: A massive public opinion is building in Kodagu district against the State Government’s proposal to widen National Highway (NH) 275 between Kushalnagar, Madikeri and Sampaje. At a public hearing held in Kushalnagar recently, the project was opposed as it will destroy the green environs in a land that extends up to over 60 kms.

A mega rally is being planned at Madikeri on Dec. 8 against this project and several stakeholders and residents of Kodagu are participating in the protest. Many organisations including United Kodava Organisation, Cauvery Sene and Coorg Wildlife Society are opposing the project and have already conveyed to the government that the Highway expansion was not needed as the existing road is wide enough to support future traffic growth.

President of Coorg Wildlife Society Col. (Retd.) C.P. Muthanna, who is also the Coordinator of Save Kodagu and Cauvery Campaign, has written a letter to Kodagu Deputy Commissioner P.I Sreevidya in this regard highlighting the ill-effects of widening the National Highway 275.

In the letter, Col. Muthanna has stated that as per norms, widening of a particular road is necessitated only when the traffic density of that particular road increases. But in the case of NH 275 from Kushalnagar to Sampaje, the vehicle density is high only during weekends and holidays and this is due to the heavy influx of tourists.

Widening the road will damage thousands of commercial and residential properties in Kushalnagar, Suntikoppa and Madikeri. Even if the Highway is made to bypass some of the cities and towns, there will be a massive loss of green cover in this region of Kodagu that forms the catchment of  River Cauvery.

Apart from increasing man-   elephant conflict due to the depletion of green cover, the project will result in rapid and uncontrolled urbanisation and will ultimately result in the areas going dry without rainfall. This will lead to drying up of already weakened River Cauvery, he stated.

The letter, a copy that has been sent to State Chief Secretary T.M. Vijaya Bhaskar stated that as of now, the road from Mysuru to Kushalnagar is two-lane with paved shoulders. This paved shoulder can be extended to the entire Highway to include the Kushalnagar-Madikeri-Sampaje stretch of NH 275. This will provide sufficient width for free flow of traffic. Certain portions of the road could be widened further in order to provide safety at sharp turnings. This will prevent unnecessary and destructive extension of the Highway, he said.

Col. Muthanna further stated that there are a number of link roads on this route that are not fully utilised due to poor maintenance. One example is Kadagadalu-Virajpet Road. If these link roads are improved and maintained well, local vehicles can use them and this will considerably reduce vehicle congestion on the National Highway.

The Kodagu District Pensioners Association has also opposed to the proposed widening of National Highway 275 from Kushalnagar to Madikeri and Sampaje. In a letter to Union Minister of Road Transport and Highways, Shipping and Water Resources Nitin Gadkari and the Prime Minister’s Office, President of the Association K.C. Biddappa has stated that the project will destroy thousands of trees in the green belt and thick vegetation between Kushalnagar and Sampaje.

Kodagu is already facing unbridled commercial activity, rampant land conversion and massive deforestation. Torrential rains during August 2018 have resulted in massive landslides destroying thousands of acres of coffee plantations bringing in untold misery for the people of the district and livestock.

Widening of NH 275 will make the presently green terrain barren and this will lead to more landslides and will threaten the very existence of River Cauvery as thousands of trees will be felled in the river catchment area. The current traffic density of 2,500 to 3,000 vehicles per day does not warrant four-lane conversion of the existing two-lane Highway, he stated.

Justifying his arguments, Biddappa compares NH 275 with Munnar on NH 49 wherein nearly 30 to 40 kms of the Highway is only a narrow single lane road. Also, NH 181 between Gudalur and Ooty is a single lane. This is because the National Highway authorities have sensibly planned the ghat section and the width of the Highway so that there is a seamless busy traffic plying on these roads without any bottlenecks, he explained.

The two-lane Highway (NH 275) is far superior to NH 181 and NH 49 in terms of width. Therefore, there is absolutely no justification for four-lane conversion the NH 275 and that too in an ecologically fragile area, he has stated. This road can be widened by a metre on either side to ensure free flow of traffic,  he stated.