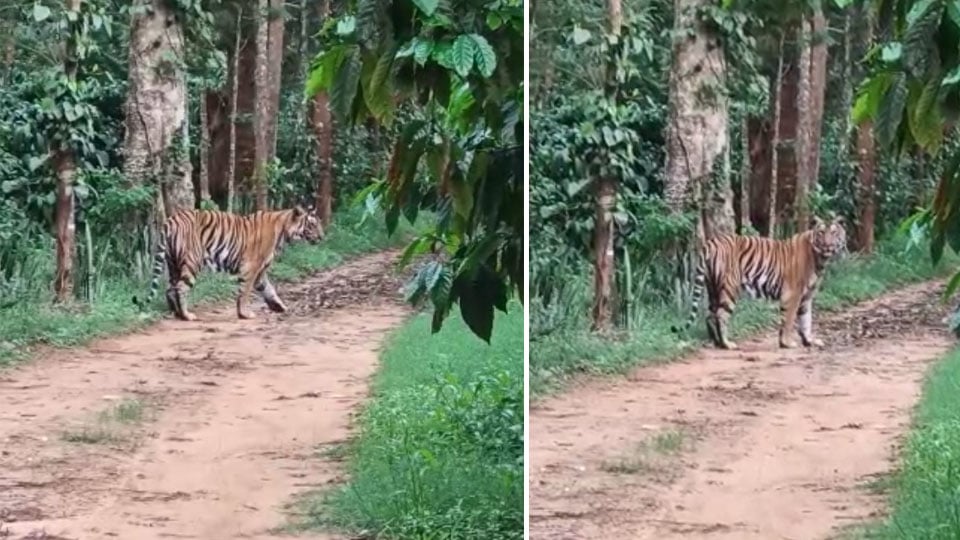 Ponnampet: The elusive tiger that is terrorising some of the villages in South Kodagu was spotted inside a coffee estate near Balele last evening. The feline was sighted near the  estate of Podamada Ashok Chengappa at Rajapura village. The photographs and the video of the fully-grown big cat has gone viral.

The video shows two people in a car inside the estate spotting the feline. The big cat was spotted walking inside the estate and it turned back to look at the occupants of the car. It disappeared into thick bushes of coffee plants as the people in the car were dazed and at the same time excited to spot the feline.

Farmers and coffee growers of Kodagu are spending sleepless nights as wild animals continue to enter human habitats and estates near forest fringes. The animals including tigers and leopards take shelter inside the coffee estates in search of easily-available prey ––mostly cattle heads —- amidst lush green foliage.

Since the last three to four months, more than 75 cattle heads have been killed and residents have recovered half-eaten carcasses in their fields and coffee estates or near cattle sheds. There are instances of the tiger entering the cattle sheds through the opening atop the shed wall and killing the livestock.

Residents have found many of their livestock with their throats partly bitten by the big cats. Out of fear of human presence in the vicinity, the tigers have abandoned the cattle heads after pinning them to ground.

After paying a paltry compensation of Rs. 10,000 — while the actual cost of a cow ranges from Rs. 40,000 to Rs. 50,000 – the Department Officials sit quiet, allege residents. Though there have been no attacks on humans, people are fearing to venture out of their houses while estate labourers refuse to come to work for the fear of the big cat.