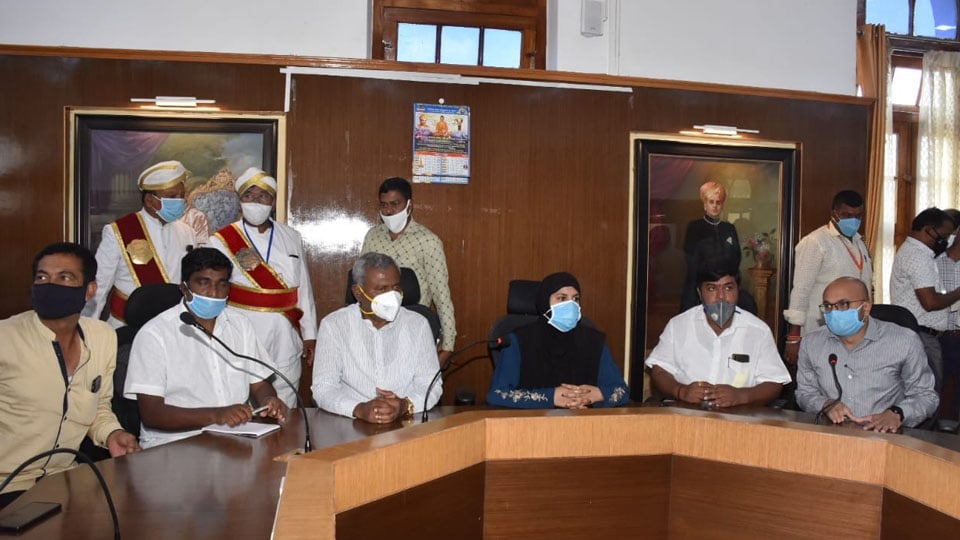 Dist. Minister holds meeting to sort out differences between Mayor and MCC Commissioner

Mysore/Mysuru: Following complaints by Mayor Tasneem that MCC Commissioner Gurudatta Hegde was not taking her and other Corporators into confidence during the  launch of the MCC’s COVID-19 lockdown initiatives such as distribution of food, ration kits and medicines and launching of Fever Clinics in the city, District Minister S .T. Somashekar held a meeting with the Mayor, Commissioner and other officials at the MCC Hall here yesterday, in order to sort out the reported differences.

Later speaking to presspersons, Somashekar sought to play down the Mayor’s  grouse against the Commissioner by attributing it to communication gap between the two.

Stating that he has directed the MCC Commissioner and other top officials to take the Mayor, Deputy Mayor and all Corporators into confidence in such initiatives, he pointed out that a prefect co-ordination between people’s representatives and officials was the need of the hour during this extraordinary crisis caused by the Novel Coronavirus pandemic (COVID-19).

Somashekar further said that he has directed the officials to keep the Corporators informed of all the MCC’s initiatives on a daily basis, as this would largely help in ironing out any differences that may crop up between officialdom and the political class in the distribution of food and ration to the poor and the needy and other targeted sections of the society.

Referring to the dipping COVID-19 positive cases in the district, the Minister said that there are only 24 cases as of today which is  heartening to note. He complimented the efforts of Doctors, Nurses and all other frontline workers in bringing down the number of cases in the district.