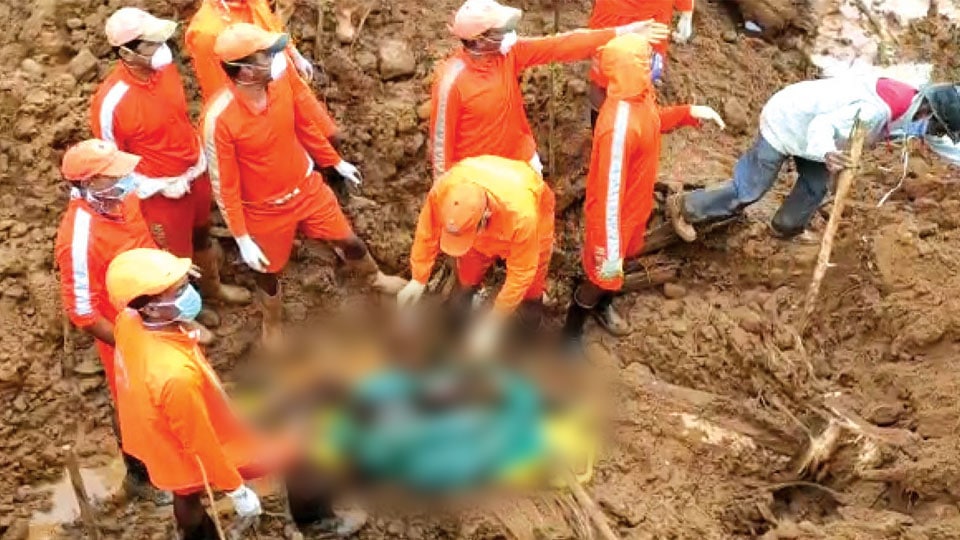 Another body found at Thora village: Death toll rises to 11 in Kodagu

Madikeri: The death toll in the landslides in Kodagu district has risen to eleven with the discovery of the body of a 60-year-old man  at Thora village along Kerala border in Virajpet taluk in the district on Sunday.

The deceased has been identified as Shankar, a member of the family of one Harish of the village. Ten residents of the village had gone missing after the Aug.9 landslide and Shankar’s body was found in a highly decomposed state after nine days of search for the bodies.

A day after the landslide, the body of Mamata was found and later on the bodies of Likhita, Anasuya and Appu were found trapped in the mud, even as the NDRF and other rescue teams continued search for the missing persons of Thora village.

The search has been hampered by slushy mud caused by heavy rains in the area.

Despite inclement weather, the NDRF team will continue its search on Monday too to trace the bodies of the remaining five persons, who are now believed to be dead, caught under the mud.

The NDRF has been using Heavy Duty Hitachi Machines for extensive clearing of slushy mud to trace the bodies of  the missing persons.

Meanwhile, a two-member team of Geological Survey of India (GSI) comprising Sunandan Basu and Kapil Sharma, inspected Brahmagiri Hill range on Sunday to take stock of the situation, following reports that the hill range had developed wide cracks. On Saturday, the GSI team had visited Ayyappa Hill in Virajpet, in which too wide cracks have developed.