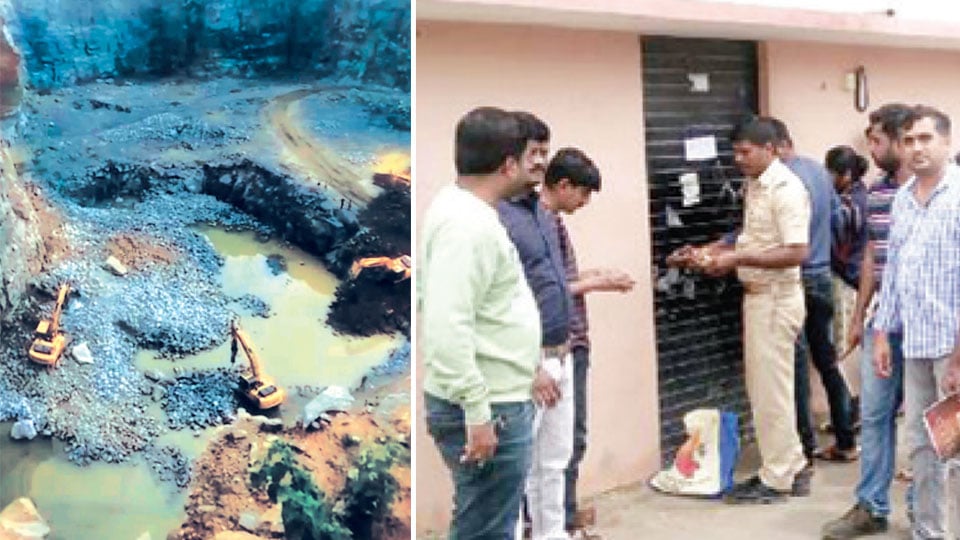 Mandya: Following reports of stone crushers and miners violating the blanket ban on the use of explosives in mining and stone quarrying activities within 20-kilometre radius around the Krishna Raja Sagar (KRS) Dam, Pandavapura Tahsildar has ordered the closure of more than 30 mining units.

These mining units are functioning at Baby Betta Kaval stone crusher quarry, Baby Betta Amruth Mahal Reserve Area, Bannangadi and many other places in and around Pandavapura. The locked out quarrying units include the one owned by former Minister C.S. Puttaraju.

The orders were issued by Tahsildar Pramod S. Patil and physically implemented by his team of officers following the directions issued by Mandya Deputy Commissioner Dr. M.V. Venkatesh. The DC had passed the instructions following loud blasting sound that was heard last Friday. The loud sounds had rattled Pandavapura and surrounding areas and the DC had personally visited the mining sites before issuing the orders.

It may be recalled that when N. Manjushree was the Mandya DC, she had banned the use of explosives in mining and stone quarrying activities in 20 kilometres radius around the KRS Dam. The ban was imposed in view of Karnataka State Natural Disasters Monitoring Committee (KSNDMC) recommending the Mandya District Administration to check damages and fractures in the Dam structures in the wake of high-intensity blasts in the mining areas around the Dam.

In a letter dated Sept. 27, 2018 addressed to Principal Secretary, Water Resources Department, Manjushree has said that high-intensity blasts in the mining areas are resulting in houses and buildings in the vicinity developing cracks apart from causing air pollution. But the ban was never implemented and miners continued to flout rules.

Administration sources told Star of Mysore that officials were anxious about illegal mining activities in the vicinity of Baby Betta (which is less than 11km from the KRS Dam) particularly at a stage when KRS Dam is full to the brim and the slightest threat to its stability could result in a disaster.

The report submitted by KSNDMC indicates imminent threat to the KRS Dam due to high-intensity quarry blasts and the resultant ground vibrations. Following the examination of the report and after ascertaining facts, blasting activities around 20 kilometres of the Dam was banned in the interest of public safety.

Permits are issued based on the nature of mining, restrictions, boring the stones and other activities. Now, all the units have been shut until further orders and all the illegal quarries have been locked, said Muthappa, Officer from the Mines and Geology Department.