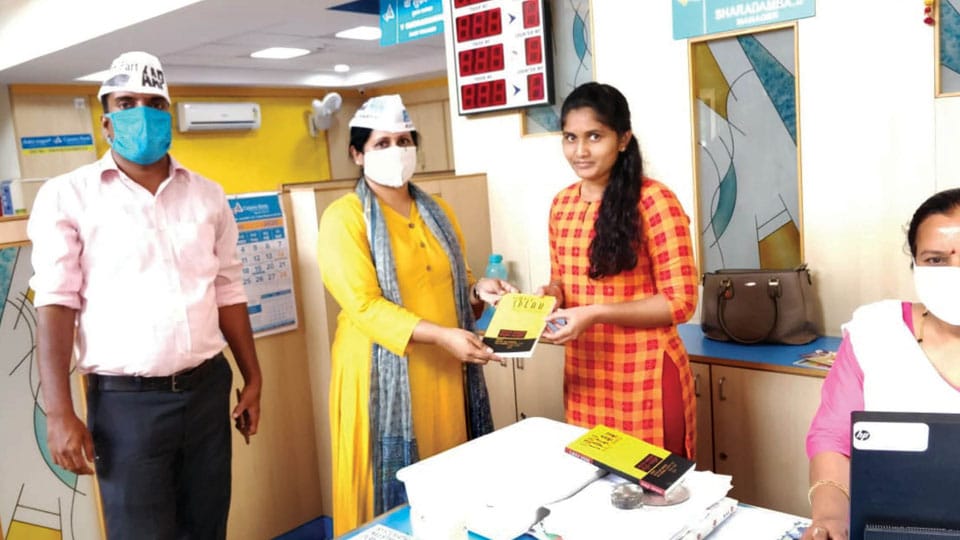 Mysore/Mysuru: As part of Kannada Rajyotsava celebrations, Aam Aadmi Party (AAP) Mysuru District President Malavika Gubbivani has started a unique campaign of distributing a book titled “Simply Speak” to help those who do not know Kannada, particularly the non-Kannada speaking employees, who have been posted in Banks and other Central Government Offices.

AAP volunteers visited Indian Overseas Bank, Union Bank, Indian Bank, Canara Bank and Bank of Baroda branches in and around Vijayanagar, greeted the staff and urged them to learn and speak in Kannada.

Since Nov. 1 was a holiday, the whole week will be celebrated by AAP as Rajyotsava Week and hundreds of books will be distributed.

Malavika has urged Donors and Institutions to join hands with AAP or take up such projects as part of their Rajyotsava celebrations.

Malavika had earlier organised campaign and protests demanding increased usage of Kannada in Banks and also for conducting Banking examination in Kannada, according to a press release from G.R. Vidyaranya, Media Coordinator, AAP.