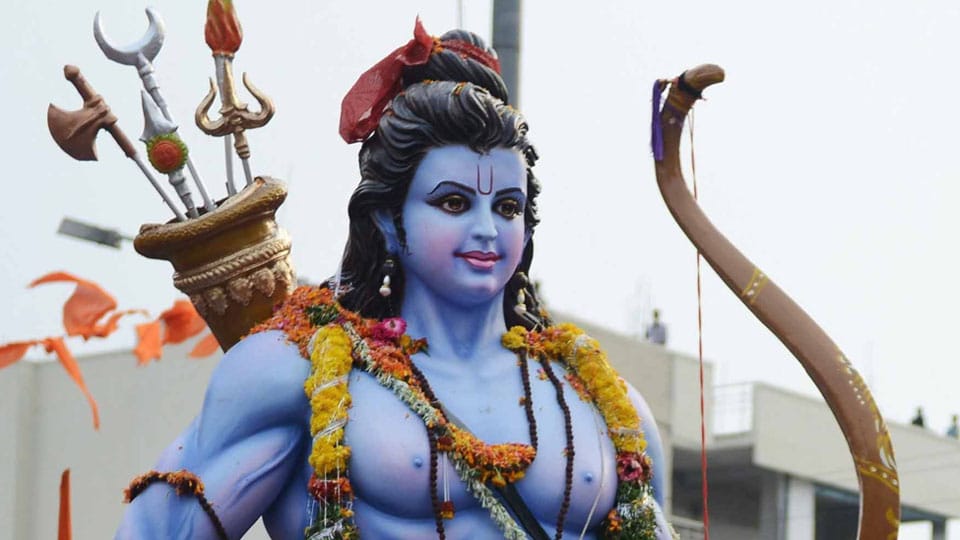 We haven’t had a more turbulent Ramanavami in recent memory. In the name of the Lord who exiled his own wife for what he considered dharma, several adharmic activities were carried out by his alleged followers.  The Government in Delhi contributed its share of adharma with arbitrary moves purportedly to stop fake news. But revelations that its own party was second to none in the fake news industry forced it to make a retreat, a suspiciously fake retreat.

Ramanavami is meant to pay homage to the ultimate Maryada Purushothama who set up the ultimate Ram Rajya of fairness, justice and prosperity.  It is meant to remind us that there are ideals of righteousness we are expected to emulate.  But what we witnessed was a display of hatred, enmity and violence. Once again Hindutva damaged Hinduism. Fake bhakti turned even Sri Rama into a political convenience for a campaign of divide-and-rule.

The main theatre of activity was predictably the Hindi belt. But terror reigned in West Bengal, too, because Hindutva warriors think the State is ripe for picking now that the Communists there have been dethroned.  There was a familiar pattern in the way violence broke out in various places. Processions, mostly unauthorised, would pass through Muslim areas with provocative songs and slogans — and the inevitable would follow. The instigators in all cases were violence-prone front organisations such as the Bajrang Dal.

Two men in leadership positions symbolised two opposing philosophies following riots in Asansol town.  The local Imam’s 16-year-old son was killed in the violence and a crowd collected at the Idgah Maidan for his burial.  The Imam, who had been at the Mosque for 30 years, told the crowd: “My son has died, but I don’t want anyone else to lose his child. If you strike back, I shall leave this town.”  His flock listened to him.

Babul Supriyo, MP representing the area, defied prohibitory orders to visit a camp nearby. The Police stopped him.  Supriyo, who was said to have assaulted a Police officer, was charged under relevant Sections.

From among the crowd, someone asked him to go back and leave them alone for the present. Whereupon the MP, who is also a Union Minister, looked at the crowd and said: “I will skin them alive.”

Sober men who ask for peace are counted among enemies because of their religion.  Belligerent men to whom the language of violence comes naturally rise to positions of high responsibility in Government.  This sums up our national tragedy.

Knowingly or otherwise, the top leadership of the Government has allowed a temper of intimidation to grow in the country.  Numerous are the saffron leaders who call for violence. The latest example is an Akhil Bharatiya Hindu Mahasabha leader who condemned filmstar Kamal Haasan’s views on “Hindu Terror” and said: “The only way to handle people like Haasan is to either hang them or shoot them dead.” Under the law such statements are punishable.  But who is there to punish when the approved political climate promotes the spirit of violence?

It is this approved climate that made the Information Minister think that fake news problems will disappear if accreditation is denied to journalists who spread fake news. For one thing, fake news is spread more by social media activists and party apparatchiks than by accredited journalists.  For another, the Minister’s party is in the forefront of this primarily political — not journalistic — activity.  Examples abound.

Besides, why this laboured move to give the impression that the fake news legislation was entirely Smriti Irani’s brainchild and that the Prime Minister, when he came to know of it, ordered its withdrawal?  It’s a bit much to believe that even  Irani will dare launch a significant policy initiative without the knowledge of the Prime Minister.  Was a bit of fake news technology used to protect the top? Smriti Irani remains unstoppable. She is now out to regulate news portals. Her fight with the Government’s own Prasar Bharati continues.

Meanwhile, near Mysuru last week, a Jain Muni was injured in a road accident.  A news portal immediately came out with the report that the Jain Muni was attacked by a Muslim.  The portal is a notorious Hindutva platform. Fake news will remain as real in our country as politicians’ fake degrees.