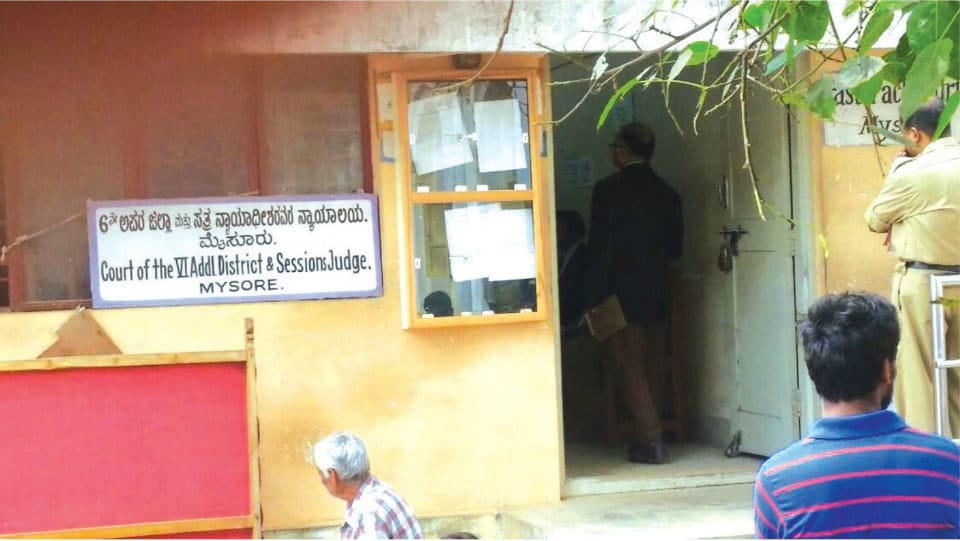 Mysuru: While it is normal for any accused in a criminal case to wait for the trial to complete and the judgement to be delivered, here is a unique case where the Judge has to wait for the accused to pronounce his verdict. The accused in this case has successfully dodged the Court six times though the Judge has passed stringent orders to the Police to produce him before the Court.

The accused is K.J. Mahesh Gowda who had projected himself as an influential person by posting photos with senior Police officers on his facebook page. Mahesh was accused of raping a minor who had delivered a child and even the DNA tests have proved that it is Mahesh’s child.

The case is being heard by Sixth Additional District and Sessions Court Judge Vijayakumar M. Pauthi and the trial has been completed. The accused was asked to be produced yesterday (Dec. 13) but he stayed away from the Court.

The rape case was reported in 2014 and Mahesh faces charges under provisions of the IPC and Protection of Children from Sexual Offences Act. Vidyaranyapuram Police had filed a chargesheet against him. In her statement, the victim told the Police that Mahesh, then 28-years-old, repeatedly raped her and her parents encouraged it as he was bailing out the family financially.

The case is in its final stage and the judgment was first reserved for Nov. 23 but his counsel petitioned the Court that his client could not attend the hearing because he was hospitalised in Bengaluru. The Court adjourned the hearing to Nov. 29 but Mahesh and counsel didn’t turn up.

Subsequently, a warrant was issued after posting the hearing to Dec. 4. Police were asked to produce him before the Court. However, Mahesh remained absconding. The judgment was again deferred to Dec. 6 after the Court directed Cops to produce him but Police failed as his whereabouts are not known. The Court had adjourned the judgment to Dec. 11 and the judge gave oral orders to KR ACP Dharmappa asking him to produce Mahesh.

As Mahesh failed to appear and even the Police failed to arrest him, the case was again adjourned to Dec.13. Special Public Prosecutor Shivarudra Swamy said that the Judge even telephoned City Police Commissioner Dr. A. Subrahmanyeshwara Rao directing him to arrest Mahesh and produce him before the Court.

“Despite this, the counsel for the accused Bikkannanavar and Shivaswamy did not produce their client before the Court,” Shivarudra Swamy said and added that the Court has adjourned the case to Dec. 16.