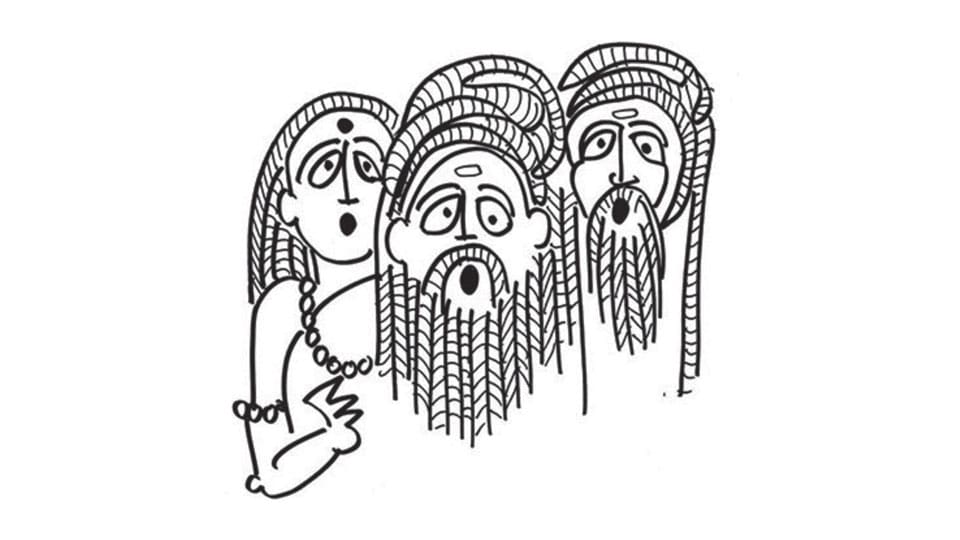 Hindus believe that knowledge (“veda” in Sanskrit) comes not from a human source, but from nature at large. This knowledge reveals itself to one who is clear in mind and pure of body. Such a person is called a rishi, which means ‘one who can see what others overlook.’ He transmits knowledge received through mantras or hymns. Historians, however, believe that rishis were poets (kavi), who composed the thousand-odd poems that make up the Rig Veda. People who transmitted this Vedic knowledge were called brahmins, the wisest of whom were often confused with rishis. As time passed, scholars (shastri), teachers (acharyas), mendicants (sadhu), hermits (sanyasi) and saints (sant) came to be identified as rishis. It is in later Puranic literature that they appear as supernatural beings, who travel between different realms of the cosmos, and have the power to even curse the Gods.

The rishi is typically visualised as a simple old man dressed in clothes made of tree bark living in the forest, eating roots and shoots, and spending his time exploring nature through rituals such as yagna, through the practice of yoga, which involves breath, mind and posture control, and through conversations with other rishis. A female rishi is called a rishika. They live simple lives, but have the power to curse the Gods, and conjure weapons.

Rishis are often classified into two categories: those who perform yagna and those who practice tapasya. Vishwamitra is a yagna-performing rishi who wants Ram to protect his hermitage while he is performing his ritual. Harishchandra interrupts his ritual and so is punished by being stripped of his kingship. Vishwamitra is also a tapasya-performing rishi, who loses touch with reality until termites build a hill around his body, until he is seduced by the damsel Menaka sent by the Gods who fear his austerities. The yagna-performing rishis can be called the old rishis, for the practice of tapasya emerges later in Hindu history. The former focussed on external fire, agni. The latter focussed on internal fire, tapasya.

The older yagna-performing rishis are seen as householders; the later tapasya-performing rishis are seen as hermits. In early texts, rishis were married. Agastya is married to Lopamudra. Atri is married to Anasuya. Vasishtha is married to Arundhati. In fact, there are stories in which ancestors appear in dreams of rishis and beg them to marry so that they can be reborn. Kardama marries Devahuti only so that he can father a child and repay his debt to his ancestors. Jamadagni asks for Renuka’s hand in marriage.

Later, there are stories when rishis refuse to marry, and this alarms the Gods, who fear that they will acquire so much power that they will overthrow the Gods, by supporting asuras. And so, Indra sends damsels known as apsaras to enchant rishis away from their austerities, compelling them to marry. Kaushika, who wants to be a rishi, is distracted by apsara Menaka and they end up having a child called Shakuntala who is raised by another rishi called Kanva.