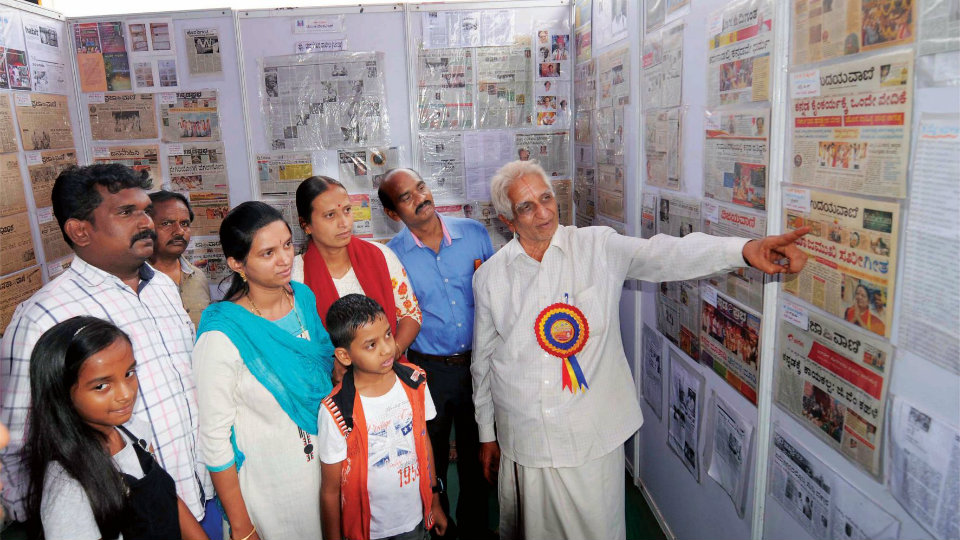 Rare display of over 50,000 literary archives

Mysuru: The ongoing Kannada Literary Meet in city has another attraction – a huge collection of over 50,000 copies of old Kannada newspapers and magazines dating back beyond 50 years.

The person behind such a rare collection is M.A. Venkatesh the 7th generation progeny of Narayana Iyengar, a prominent person associated with Mysore Maharajas.

This is a unique collection especially for literary buffs and journalism students who can have a glimpse of design of papers then and the language used. However the exhibits are not for sale.

Venkatesh presently resides at Jayanagar in Bengaluru with his son while his daughter is a resident of Gokulam here. Venkatesh was said to have got in touch with G. Narayana, President of Kannada Sahitya Parishat in 1960 and began his collection of important articles. He has a collection of over 450 articles of Dr. Shivaram Karanth and 350 articles of Masti Venkatesh Iyengar. Venkatesh has participated in over 26 Kannada Sahitya Sammelanas and has organised about 600 exhibitions of his rare collections.

Venkatesh is not just a collector of articles and news papers but also a good writer himself. His works include ‘Itta Hejje, Patta Shrama,’ ‘Dasha Dikkugala Mahan Kalavaidru,’ and ‘Mysore Nakshatragalu’.’ He has also won many awards including Kannada Sahitya Koota’s Rajyotsava award and  ‘Karnataka Kalajyoti’ award instituted by Sir M. Visvesvaraya Engineering  Foundation.