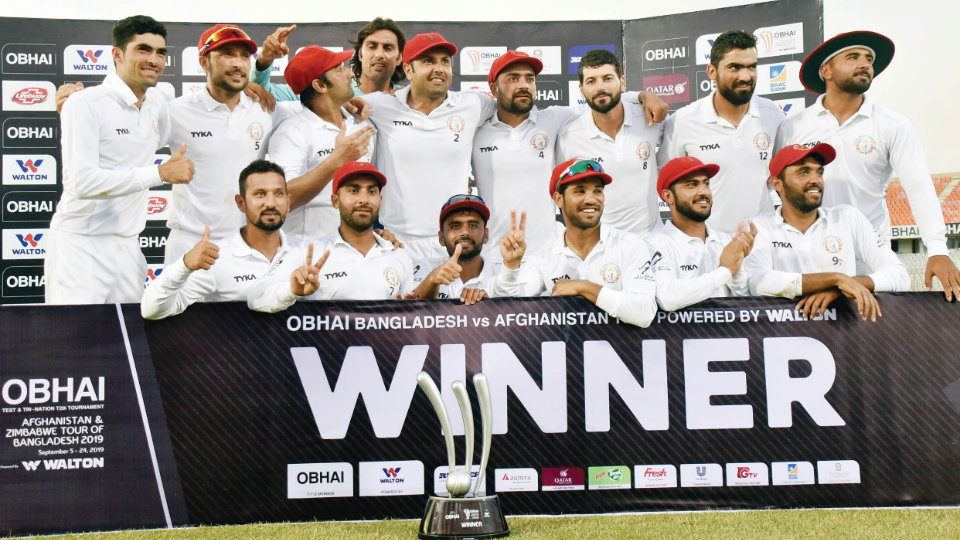 Rashid Khan-led Afghanistan thrashed Bangladesh by 224 runs in the one-off Test match and registered their second win in Test cricket at Zahur Ahmed Chowdhury Stadium here yesterday. Leading from the front for Afghanistan, Captain Rashid Khan took three of the last four wickets as the visitors bowled out Bangladesh for 173 runs in the second innings.

At the beginning of day-five, Afghanistan needed four wickets to win. After a delayed start, Bangladesh resumed their innings with Soumya Sarkar and Shakib Al Hasan were at the crease. The hosts were given only 18.3 overs to survive after play resumed in the final session following a rain break but they succumbed with three overs to spare. After Shakib’s wicket, Sarkar, along with Mehidy Hasan tried to prevent any further damage.

They were successful to an extent as Bangladesh managed to prevent losing any more wickets in the last session. However, Rashid struck again to dismiss Mehidy. With Mehindy’s wicket, Afghanistan were only two wickets away from the victory. Once again, Rashid bowled a brilliant spell and took the two wickets quickly.

The leg-spinner got rid of Soumya Sarkar as the last wicket to spark off wild celebrations among the Afghanistan players.

Rashid finished with 6/49 while Zahir Khan picked up three wickets. Mohammad Nabi chipped in with one wicket. Afghanistan had gained Test status last year and had played just two Tests before this — losing to India in their maiden match and beat Ireland in its only other Tests.

With this win, Rashid Khan became the youngest captain in the history of Test cricket to record a maiden win in the format.

The Afghanistan skipper also became the first player to record a fifty and 10-plus wickets in his debut game as captain in Test cricket. Meanwhile, Bangladesh become the first team to lose a Test against 10 different nations.