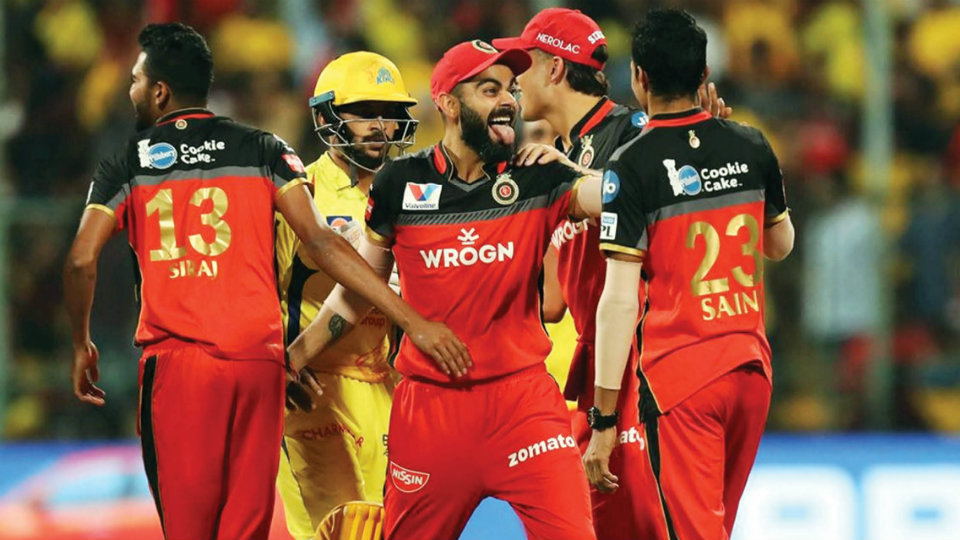 Royal Challengers Bangalore (RCB) beat Chennai Super Kings (CSK) by just one run in their IPL 2019 match at Chinnaswamy Stadium in Bengaluru, with only a last-ball run out staving off either a Super Over or a CSK win.

A dismal showing by CSK’s top order — they were 28-4 at one point — was almost negated by M.S. Dhoni, whose 48-ball 84 n.o., went in vain but at one point seemed to have swung the tie in the away team’s favour. Dhoni lost partners aplenty but as long as he was at the crease RCB could not breathe easy. CSK needed 36 off the final 2 overs yet some insane power hitting from Dhoni nearly took them over the line.

After CSK took 10 runs off the 19th over, Dhoni took apart Umesh Yadav, the man designated to bowl the final over. The first 3 balls went for a boundary and 2 sixes, respectively.

Dhoni then ran two before smoking Yadav for a six that travelled an amazing 111 metres, clearing the stadium roof. Yet with just two runs needed of the final ball, Dhoni swing and missed at an Umesh slower ball.

He took off for a run, as did his partner Shardul Thakur. Yet a direct hit from Parthiv Patel behind the stumps was enough to hand RCB a win that should have, in theory, been a lot more comfortable.

CSK got off to the worst start possible, with Dale Steyn dismissing both Shane Watson and Suresh Raina in the first over. Watson edged one to Marcus Stoinis at first slip whereas Raina’s stumps were castled.

Faf du Plessis gave a simple catch to AB de Villiers off Umesh Yadav’s bowling and Kedhar Jadhav too was removed by Umesh, with De Villiers the man taking the catch once again.

Earlier after being asked to bat by Dhoni, RCB rode on a half century from Parthiv to post 161-7 at the end of their 20 overs.

Parthiv (53) batted through the majority of the overs even as RCB lost wickets on a regular basis, with batsmen getting starts but failing to convert them.

The match started on a bad note for the home side as Deepak Chahar got Virat Kohli to edge one to Dhoni in the third over itself.

Akshdeep Nath was the next man out and he too played a decent knock, scoring 24 runs and stringing together a 41-run partnership with Parthiv but he too was removed by Jadeja.

Parthiv eventually brought up his half-century but was dismissed by a slower ball from Dwayne Bravo as he gave Watson a simple catch.

Parthiv Patel was chosen as the Man of the Match.