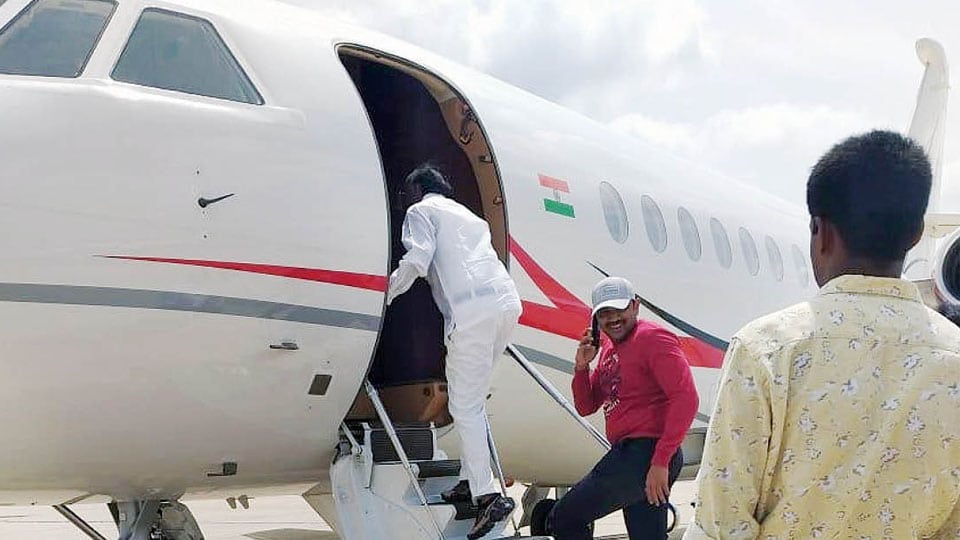 Bengaluru: After assuring Congress leaders that he will withdraw his resignation last night, Hoskote rebel MLA MTB Nagaraj sang the famed “Catch me if you can” song written by Johnny Wakelin as he ran towards the aircraft to board a special flight to Mumbai from the HAL Airport in Bengaluru this morning. He apparently told his family members today that he was going to a temple in Bengaluru but instead headed to Mumbai.

Nagaraj joined the renegade Legislators holed up at a hotel in Mumbai.  Interestingly, BJP leader R. Ashoka was spotted along with Nagaraj at the HAL Airport. BJP insiders said that Nagaraj was contacted yesterday midnight by Ashoka and Aravind Limbavali, who are believed to have convinced Nagaraj to jump ship.

“R. Ashoka and Aravind Limbavali met MTB Nagaraj and convinced him to side with the BJP. Since Nagaraj could be convinced again by Congress leaders to remain in the party, it was decided that he would suddenly move to Mumbai and stay with the other MLAs until the trust vote,” a BJP source said.

Yesterday, Nagaraj had told Congress leaders including former CM Siddharamaiah and Minister D.K. Shivakumar that he will reconsider his resignation and confirmed that has decided to stay back in the party.

But just hours after his 15-hour marathon meeting with Congress leaders, Nagaraj boarded the special flight to Mumbai and joined the other rebel MLAs, showering cold waters on Congress’ efforts to bring back the entire rebel MLAs. Congress leaders did not expect the last-minute U-turn by Nagaraj.

Revanna blamed for resignations: Nagaraj blamed the Public Works Department (PWD) Minister and brother of Chief Minister H.D. Kumaraswamy H.D. Revanna, for the rebellion. Nagaraj alleged that Revanna interfered in the transfer of officials in the Housing Department.

“The biggest reason why leaders are unhappy is Revanna. He keeps transferring officials from all departments to suit his needs. I am a Minister and if he transfers officials from my Department, how can any work be carried out properly?” Nagaraj said.

As the crisis that threatens the survival of Karnataka government entered the ninth today resignations by rebel MLAs and attempts to persuade them not to resign continued. Congress Legislature Party (CLP) leader Siddharamaiah has called for a CLP meeting tomorrow at 9 am.

BJP demands trust vote tomorrow: The BJP too upped the ante demanding that Kumaraswamy seek a trust vote tomorrow itself (Monday, July 15), a day prior to the Supreme Court hearing on a similar petition of 10 other rebel MLAs of Congress-JD(S) who have resigned.

“I will request Kumaraswamy to resign immediately because more than 15 MLAs from JDS and Congress, and also two independent Ministers have resigned and they have reflected that they will support the BJP,” State BJP President B.S. Yeddyurappa said.

Five more MLAs move SC: Five more rebel Congress MLAs moved the Supreme Court yesterday against the Assembly Speaker not accepting their resignations. These MLAs are Anand Singh, K. Sudhakar, MTB Nagaraj, Munirathna and Roshan Baig. They have sought impleadment in the already pending application filed by the 10 other rebels MLAs on which the hearing is scheduled for Tuesday.