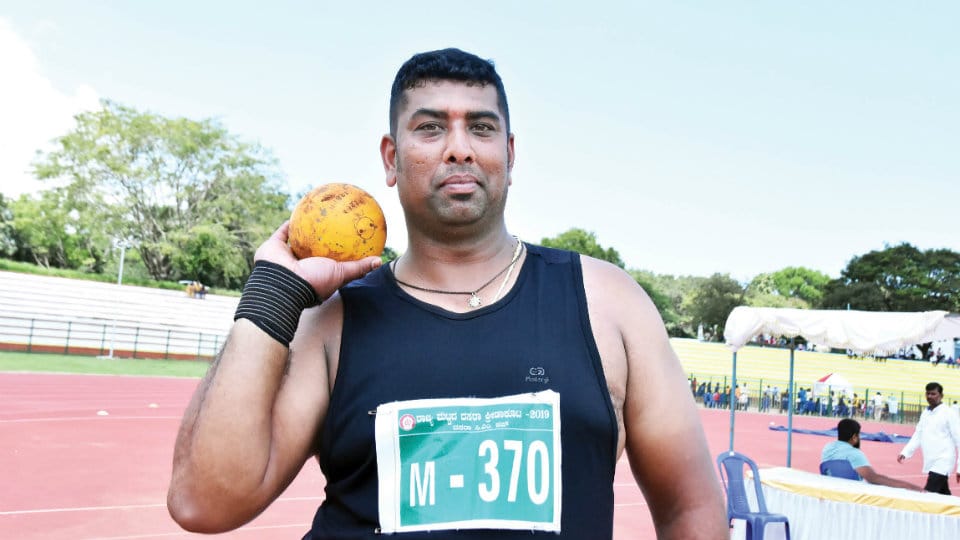 Athletics is the mother of all sporting events. Athletics contribute greatly to the development of character traits such as courage, determination, sense of achievement and as well as develops personality. Our city’s upcoming and talented athlete M.C. Mohan Kumar has done all Mysureans proud with his performances in the State-level Championships. Mohan won gold in the shot-put event for men in the Dasara Games 2019 for the “Chief Ministers’ Cup” with a new meet record. He is our ‘Star This Week.’

Mohan Kumar has been consistently performing well in the men’s section in the State-level Championships. He represented Mysuru Division and threw the shot-put to a record distance of 16.22m in the Dasara Games-2019 and created a new meet record erasing his own previous mark of 15.92m set in 2013.

Mohan represented Mysuru district in the State Senior Athletic Meet-2019 held at Sree Kanteerava Stadium in Bengaluru in July and won bronze medal in the shot-put event with a throw of 15.25m.

Mohan also won silver medal in the 2018 Dasara Games in the shot-put event for men with a throw of 15.28m. He represents Mysuru district and has been bagging medals in the State Championships consistently.

He practices at Chamundi Vihar Stadium and trains upcoming athletes. He trains V. Ambika (Junior National medallist in shot-put) and Ramya (International Para athlete) and helped them to perform better in the National and International-level.

Mohan intends to work hard, improve on his performance and win medals in the National-level apart from sharing his vast experience with the upcoming athletes and train them into medal-winning prospects.