Addressing media persons at her Office yesterday afternoon in the wake of the District Heritage Committee taking objection to the ongoing works, she said they are open to specific suggestions and inputs from the Heritage Committee that could be incorporated into the work in progress.

The Rs. 15 crore project is half way through and the revised deadline for its completion is June 30, but the Committee has taken umbrage at the works on the ground that there was violation of conservation norms and diluted heritage elements.

A meeting of the stakeholders and officials besides a site visit to the Railway Station is slated for May 25 to resolve the issue but the Railway authorities have maintained that there is no violation nor has the Heritage Committee raised any specific objections.

The City Railway Station building redevelopment has been taken up without any compromise on its historical and heritage look. We are giving a heritage touch to the new inclusions. There is no question of stopping the works. We will complete the works before the monsoon, she said.

“We had sought their permission just for courtesy. We do not want to hurt the sentiments of the people. The authorities had written a letter to MCC Commissioner and DC in August 2018 furnishing details,” she said and added they had received in-principle oral approval from the Deputy Commissioner, who also heads the District Heritage Committee, and hence took up the work.

Aparna Garg said that if the Heritage Committee suggests any corrective action to redress any specific violations, it could be incorporated. However, she underlined the imperatives of adhering to a time-frame as the works entailed passenger comfort and safety and civic works at the Station premises had to be completed before the southwest monsoon gathers momentum.

The earlier deadline was April 30 but it has been revised and has to be completed at any cost by June 30, she said. 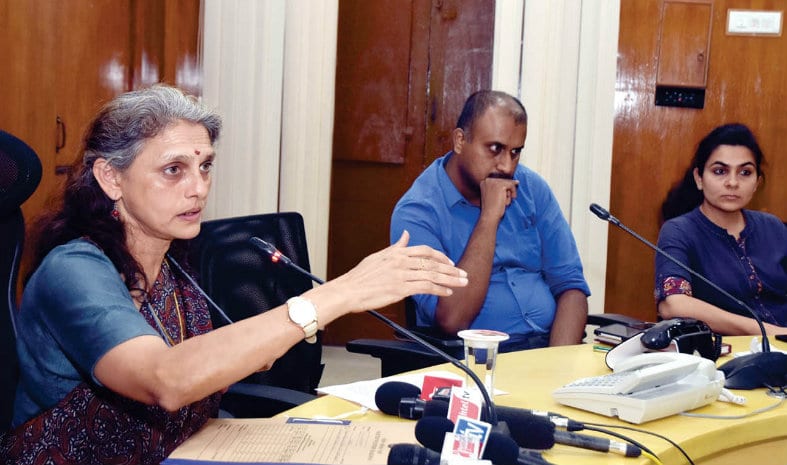 DRM Aparna Garg addressing a press meet at her Office in city yesterday.

Ongoing works and in pipeline

Indian Railways has identified 64 Railways Stations as a continued endeavour to improve Stations and customer experience. In accordance with the above, Mysuru Railway Station building redevelopment has been taken up without compromise to its historical and heritage structure.

2 COMMENTS ON THIS POST To “Redevelopment Project will not mar heritage look of City Railway Station: DRM”