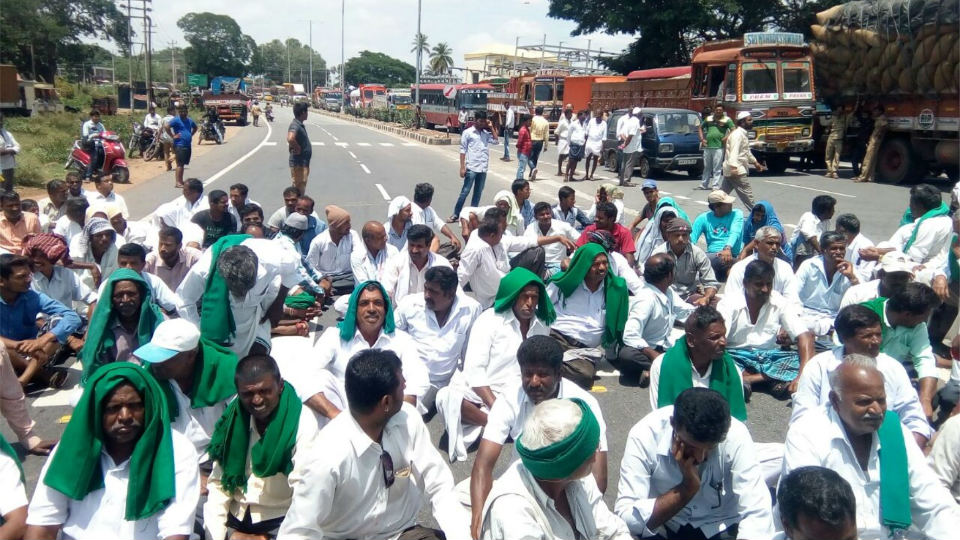 Mysuru: The vehicular movement on the Mysuru-Nanjangud Highway (NH 212) was disrupted for a couple of hours, as farmers staged a rasta roko in protest against the release of Kabini water to Tamil Nadu, this morning.

The farmers blocked the highway near Hullahalli circle not letting vehicles to travel towards Tamil Nadu and Mysuru. The protestors demanded the immediate stoppage of water to Tamil Nadu and release the same to Hullahalli and Ramapur canals.

Following this protest, the District Police had to divert the traffic movement through Hullahalli and Hadinaaru villages respectively. The vehicles were stuck in the traffic for more than 2 kms on either side  of the Highway.  Despite requests from the Police, the protestors did not budge and continued their dharna blocking the Highway. They also threatened to lay a siege on Kabini reservoir if the authorities continued to release water to Tamil Nadu.

They said that the authorities, which released water to canals after July 23 protest, had stopped the same after four days and continued to release water from Kabini reservoir to TN.

Meanwhile, members of BJP Raitha Morcha staged a protest in front of Deputy Commissioner’s office demanding  the stoppage  of water to Tamil Nadu.

They demanded the State Government to release water to canals to help the farmers and livestock and threatened to intensify their protest  if the demands are not fulfilled.