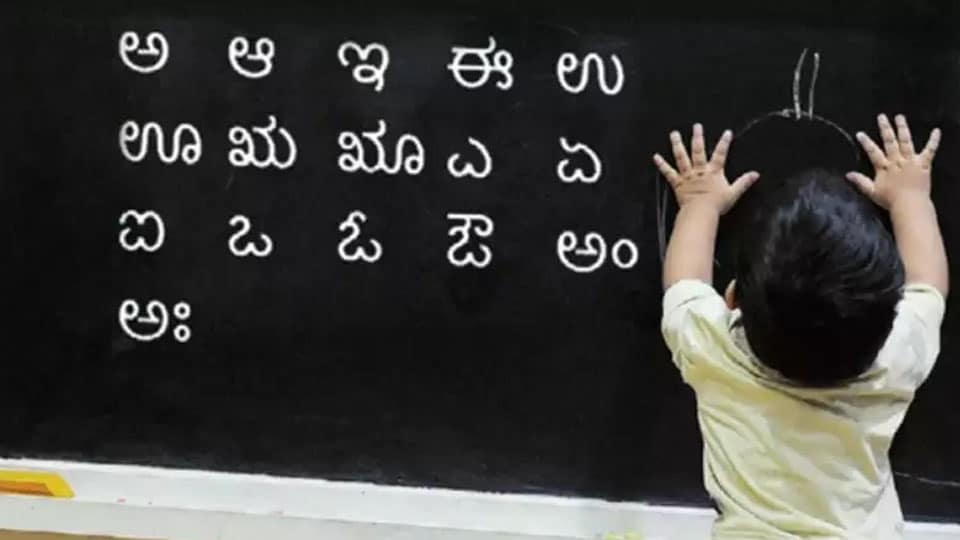 Remembering Kannada only on Rajyotsava

November 1st was Karnataka Rajyotsava, our State’s birthday. It was on this day in 1956 that all Kannada-speaking provinces were brought together and named Mysore or Mysore State under the States Reorganisation Act. Then on November 1, 1973, it was renamed as Karnataka.

Every year to mark this day, our leaders after hoisting the yellow-red Karnataka flag, speak of promoting Kannada. Then the pro-Kannada activists say, “Outsiders must learn Kannada.” Yet in Bengaluru 68% of its 1.2 crore population speak languages other than Kannada.

So, the question is why is Kannada losing out in Karnataka? North Indians in Chennai speak Tamil but in Karnataka they don’t speak Kannada after living in the State for years. Why? Are Kannadigas too accommodative? Should Kannadigas insist on speaking Kannada thereby forcing the new migrants to learn the language like how Tamils have done? Or, should Kannadigas first speak Kannada themselves before asking others to do so? Because most Kannadigas speak their own dialects rather than Kannada.

For example, all Muslims in Karnataka speak Urdu unlike in Tamil Nadu or Kerala where everyone speaks the State language. In Kodagu district, people speak the local dialect called ‘Kodava thakk’. In Mangaluru district, they speak Tulu and Konkani. In North Karnataka, they speak a mix of Kannada, Telugu and Marathi.

Even our leaders who speak about “protecting” Kannada abandon Kannada and break into broken English the moment a national TV channel thrusts a microphone before them. Why can’t they reply in Kannada, the language they are most articulate in like politicians from other States?

Also many of our leaders and activists tend to be hypocrites, in the sense that while asking the poor to choose Kannada medium schools they send their own children to English medium schools. And who says that one cannot be proficient in Kannada while studying in English? Fanatic Kannada propagators must realise English is the language that has made us employable and competitive in the global market. It is the global business language, according to “Harvard Business Review” Report.

A 2014 Report from the Centre for Research and Debates in Development Policy states that men in India who spoke fluent English earned 34 percent higher wages.  That is why our former Chief Minister H.D. Kumaraswamy announced the introduction of English as a medium of instruction in 1,000 Government Schools in 2018.

His decision had led to a huge backlash and his partner in the Government Siddharamaiah too joined in and said, “The primacy of Kannada in Karnataka is non-negotiable. Kannada is everything in Karnataka. I won’t allow English Medium Primary Schools run by the Government. I will speak to the Chief Minister.”  If he was so passionate about Kannada why did his children study in English Medium Schools?

Guess that is why Kumaraswamy’s brother and then PWD Minister Revanna reminded everyone saying, “The same people who send their children and grandchildren to English Medium Schools oppose it when the Government introduces English as a medium for the benefit of poor and village children.”

Now, according to data collated by Department of Public Instruction and published in ‘The Hindu’ in September 2019, as many as 26,443 students have been admitted to English-medium sections, as opposed to 12,034 to Kannada-medium in same schools.

The report says many Government School heads have attributed the poor student strength in Kannada-medium to the opening of English-medium sections. Owing to pressure from parents and members of the School Development and Monitoring Committee (SDMC), some school managements have opened more than one English-medium section! So Kumaraswamy was right, the poor know that English is a language that could fulfil their aspirations in a global economy.

But while it is a great asset to know English, it is important to know your regional language too from a sociological point of view.  And if you want to make people speak Kannada, especially outsiders, then we need to make its learning accessible.

May be pro-Kannada organisations, instead of simply ordering that “outsiders must learn Kannada” should ask the Government to set up inexpensive spoken Kannada classes in all Universities. After all, spoken Kannada is more useful than written Kannada.

Here, young IT entrepreneurs have done more for Kannada than by various Kannada organisations and the Government. These entrepreneurs have launched Kannada learning apps and websites like ‘Kannada Baruthe’, ‘Learn Kannada Quickly’, ‘Day2Day Kannada’ and ‘KannadaGottilla.com.’

Even the Central Institute of Indian Languages (CIIL) based in Mysuru offers an online Kannada course for Rs. 500. Unfortunately one has to go through “script lessons” before getting spoken Kannada lessons.

In the end, the onus is also on the outsiders to learn the local language. Non-Kannada speakers, looking to settle down in Karnataka, will make life easy for themselves if they learn Kannada as they can effectively communicate with the Police, local Government or even in shops. Also knowledge of the local language will help one integrate into the community, else they will always be “outsiders.”

5 COMMENTS ON THIS POST To “Remembering Kannada only on Rajyotsava”