Home » Columns » A report on the Night of Shiva 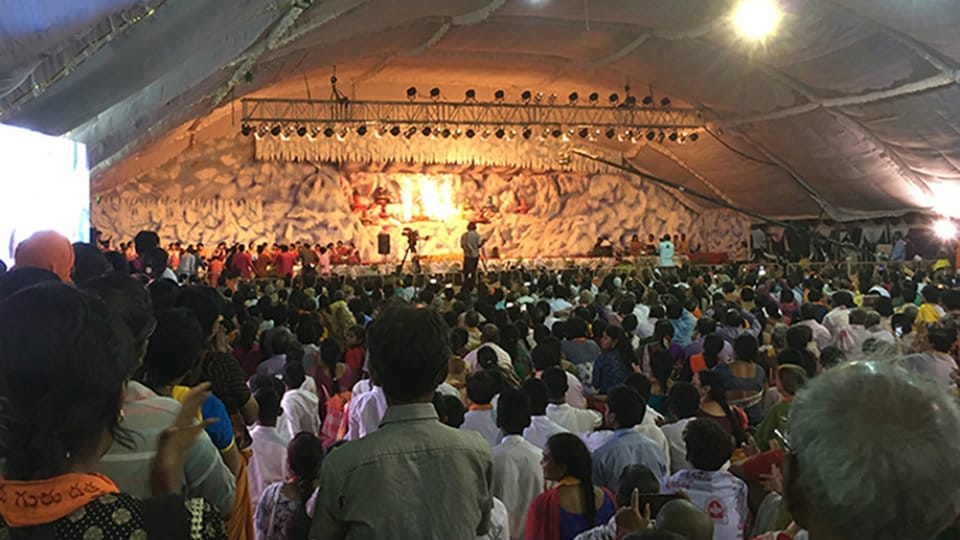 A report on the Night of Shiva

I have always wondered what happens on Shivaratri…do people actually pray at temples all night long? Do people fast? Do people feel a sense of spirituality? And are the whispers that some people sit around playing cards and getting high true? Also what happens in our city on the night of Shiva? Is it crowded? Is it bustling? I decided to find out.

My curiosity about Shivaratri this time round was mainly because of Sadhguru Jaggi Vasudev — The Spiritual Guru of Mysuru origin who gained enlightenment atop our very own Chamundi Hill.  Now, Sadhguru piqued my interest in Shivaratri because two years ago in one of his discourses he had mentioned about erecting the “biggest face on earth!” And that it had taken him two-and-a-half years to decide on the face!  And this Shivaratri that gigantic face was ready to be unveiled to the world and I wanted to see it.

Apart from seeing the 112 ft. face, I also wanted to hear our PM’s speech, the Sadhguru’s discourse and Kailash Kher, one of my favourite singers, who was to perform.  So I logged on to the Isha Foundation website to watch the show.

The PM unveiled the bust of Shiva and it looked imposing but what was truly amazing was the number of people at the event. It seemed like a never-ending ocean of humanity! I was left in awe and wondering how are they providing rooms for all these people? How many mobile toilets do they have? Is this new statue going to leapfrog Isha Foundation into a pilgrimage centre and destroy the nature around it? And hoped not.

The PM spoke. And he spoke well. Not even a sentence of politicking creeped into his speech, it was all about Yoga and its benefits. Later, the Sadhguru spoke and it was not half as good as his usual discourses because his usual flow was broken as he had to stop often so they could translate what he said into Hindi.

Ocean of devotees at Isha Foundation in Coimbatore.

Yes, the discourse was disappointing but the show itself was mind-boggling. Unlike typical religious sombreness that descends on religious events this event exuded a sense of joyousness, a celebration of life.  And as Sadhguru Jaggi walked up and down a long aisle waving at the disciples while performing some quirky dance moves it was obvious that it was also the night of Jaggi, not just Shiva.

So at 11.30 pm I decided to physically place myself at a Shivaratri event and see how it felt.  I drove to Sri Ganapathy Ashrama. Here too the atmosphere was festive. There was music and a well set up stage.  Hundreds of devotees stood in line to bathe the crystal linga (spatika linga).  The line moved fast and was managed efficiently. Outside a neat queue stood as the Ashrama volunteers handed out the much-coveted rudrakshi bead procured from the 100 trees planted in the Ashrama’s organic farm on Bannur road.

There was also nice hot coffee, which tasted delicious as we watched a linga sprout on the stage with dramatic effect as music and fireworks announced its “udbhava” or birth. Was it spiritual? Not really… but it was enjoyable and interesting.

Next I drove to the 108 Linga at Gurukula on Ramanuja road. Here too there was light music, devotional songs and a crowd. Then next stop was the temple in the Palace but here the crowd was so much that I couldn’t see the Golden Shiva that is brought out once a year.  But what was amazing was that in almost all the temples people were so well-behaved! May be the Sadhguru is right, there is an upsurge of the system that makes us better during Shivaratri? Or may be everyone was just sleepy and tired to get aggressive. 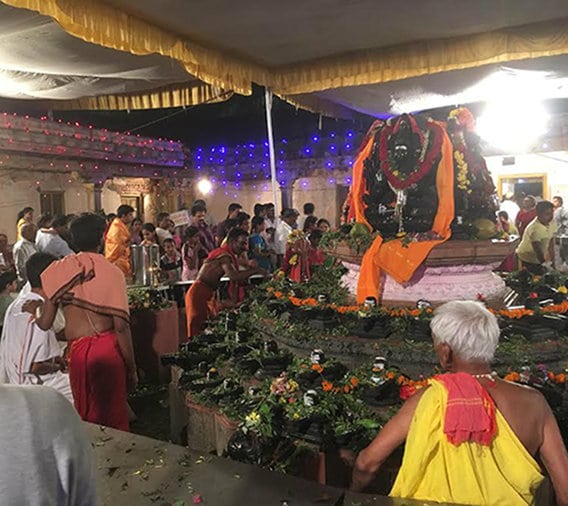 The point is there were a lot of people everywhere and there was no one honking, there was no shouting, and there was no aggressive pushing in lines…it was my most pleasant trip to a temple in a long time.  Also it felt good to see beautifully dressed women walking in areas in and around temples so late at night fearless and joyous. If any foreigner saw this sight they would think India is a liberal, safe, spiritual and happy nation. Sadly this happens very rarely.

Speaking of foreigners in temples…they were everywhere — from Sadhguru’s Ashrama in Coimbatore to Ganapathy Ashrama in Mysuru. I even saw a whole bunch of them at the Mathrumandali Eshwar temple at 1.30 am looking truly smitten with Lord Shiva…may be it’s true Shiva is the  “coolest” of all Hindu Gods.

So was my Shivaratri spiritual… not really. But I was not looking for it, I was on a see-and-tell mission. But it was nice to know you can dance your way into a spiritual high like Jaggi, you can sing your way into a spiritual zone like in Ganapathy Ashrama or you can simply go to a temple and sit in a quiet contemplative corner. Or you can play cards too and show up for the Lord’s darshan at midnight like some people did.

Now was the city bustling? Not really but all the talk of yoga from Sadhguru and our PM had made me conscious of my breathing…Sadhguru said yoga is necessary for a mind that seeks a logical and scientific validation for everything…may be I shall take up yoga to twist my stiff body so as to untwist my logically coiled mind. But first I have to untwist my tongue after trying to chant Sadhguru’s hymn ‘Bho Shambho Shiva Shambho Swayambho.’ May be I will just stick to the more simple ‘Om Namah Shivaya!’