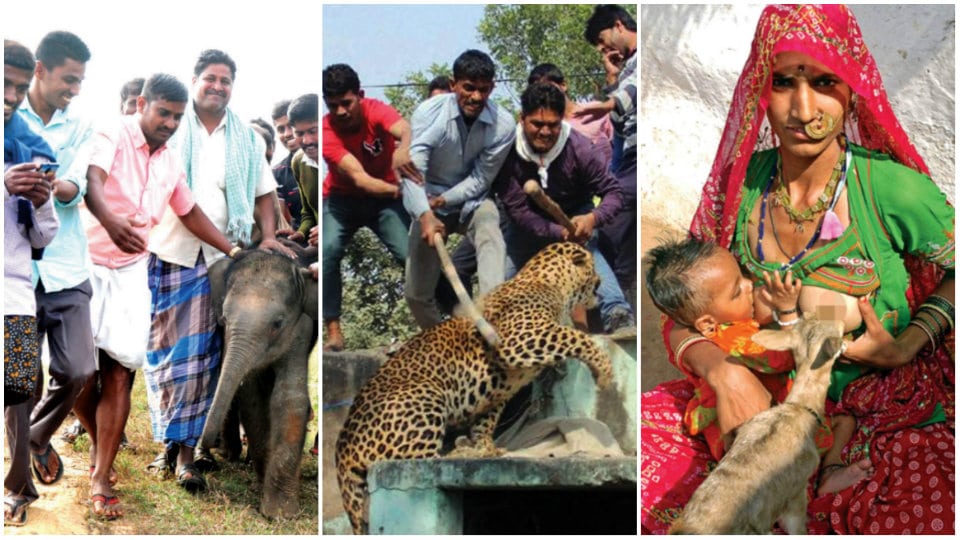 On Tuesday, selfie-obsession took another life. This time it was not suicidal. It was murder.

On Monday an eight-month-old elephant calf with fever strayed near a village in Gundulpet with its mother. The villagers raised a ruckus and pelted stones at them. The mother and calf ran for their life. The mother made it back into the forest but the calf could not. That’s when a pack of humans surrounded the calf, pushed it around, tugged at its tail, toyed with its sensitive trunk, pulled its ears and started clicking selfies.  After much struggle, the forest officials managed to rescue the calf from the ‘selfie-grip’ of wild humans, but alas the calf died.

Meanwhile, the mother had returned to where she had lost her calf and stood trumpeting, calling for her baby, not knowing that cruel men had murdered her child, and for what? A selfie.

This tragedy shows how cruel we have become. Such acts of cruelty against animals are being reported across our nation. In Gurgaon’s Mandawar village, a leopard was chased and beaten to death. This gruesome act was filmed and people posed triumphantly with its body.

In Chitradurga, Karnataka, people cornered a sloth bear and attacked it with sticks and rocks. The bear barely survived.

In Assam, a mob not only killed a leopard that had mauled and killed an elderly person but they cut up the big cat and ate it.  Such acts make one wonder who is the real beast here?

But when humans turn into beasts it is the law that should scare them back to being humane, which isn’t happening because the law itself needs some rescuing.

Under Section 11 of the Prevention of Cruelty to Animals Act, 1960, a first-time offender can walk free after paying a paltry Rs.50 as fine. A second time offender would face a fine of upto Rs.100 and upto 3 months of imprisonment if the court wishes. But courts rarely wish punishment upon animal abusers.

Some of us may recall two incidents — first where two students of Madha Medical College, Chennai, filmed a video of themselves throwing a street dog off a terrace for fun. The dog suffered multiple fractures and now can hardly walk. But the students walked away comfortably after paying Rs.2 lakh fine to the Animal Welfare Board.

Then there is the case of four students of the Christian Medical College in Vellore near Chennai. These students caught hold of a monkey, tortured it in front of 30 classmates. When the Police came they found the monkey had multiple fractures from being tied up and beaten.  They also saw that a stick had been inserted in the monkey’s rectum and forced out through the front of its body and then partially burnt. It’s shocking that not even one of the 30 classmates stopped this macabre act.

How perverse. How disturbing and more importantly, how can these medical students be allowed to become doctors, a profession that requires empathy and kindness?

The courts, apart from fining them, should have set up a team to monitor them because such level of sadism cannot make a good doctor. It can make only sociopaths who could be a danger to society.

Even the special animal, the Holy Cow, has it hard. Where are the gau rakshaks to rescue cows that are left to eat plastic bags which causes painful death?

Our MCC Commissioner recently said that cattle owners who let their cows wander and eat plastic near dustbins would be fined Rs.500 for the first offence, the second time they would confiscate the cow and take it to Pinjrapole.  Was it done? No.

When you only talk about a stick and don’t use it, people will assume you don’t have one. This is the problem. Our law is only talk, there is no stick.

The father of this nation had said, “The greatness of a nation and its moral progress can be judged by the way its animals are treated.” Today let alone animals, we don’t even treat humans with kindness.

Now, when it comes to animals and nature all of us can learn a thing or two from the people of Bishnoi community in Rajasthan. This community with a few thousand people have been following Hindu Guru Sri Jambeshwar Bhagwan since the 15th century and religiously obey 29 rules set by him. One of the rules is that they should love and protect both animals and nature.

So this community fiercely protects its trees and animals.  In fact, Bishnoi women even breast-feed orphaned baby deer. No wonder, poachers don’t dare enter the forest areas close to this village.

It is said, “Humanity’s true moral test, its fundamental test… consists of its attitude towards those who are at its mercy: animals.” In that we have failed. We have failed because our laws have failed.

Even our Constitution states that one of our Fundamental Duties (Article 51(g)) is that we show compassion to all living creatures. But then, when have we ever cared about fundamental duties, we only want our fundamental rights. And so sadly animal rights are out of our sight.

3 COMMENTS ON THIS POST To “Human Beasts and Helpless Animals”