Junglescapes, a Bengaluru-based NGO that has been relentlessly working on restoration of degraded forest eco-systems, especially in the Bandipur Tiger Reserve, has bagged the 2017 Full Circle Award given away by Society for Ecological Restoration (SER), a world’s leading body for restoration,  head-quartered in Washington DC. Junglescapes is the only second Indian recipient of SER Award.

Rotarian C.R. Hanumanth of Mysuru is a member of the Project Governance Committee of Junglescapes. SER gives biennial awards under three categories. One of the three awards is the Full Circle Award given to an NGO that is recognised for its contribution to the practice of restoration in participation with local indigenous communities. The award to Junglescapes was presented at the SER Global Restoration Conference held in August 2017 at Brazil.

Junglescapes has been working since 2008 on ecological restoration of degraded forests around Bandipur Tiger Reserve. It adopts a community participative model where local communities are actively involved in all aspects of the restoration efforts, providing them alternative livelihoods and an opportunity to demonstrate responsible custodianship towards forests.

Degradation and its impact

Reasons for degradation of forests include human pressures, excessive cattle grazing, firewood collection for cooking and other activities like mud-brick kilns, timber-logging, large-scale interference in forest eco-systems and invasive weeds which have become a major threat.

One of the impacts of forest degradation is human-wildlife conflicts. Absence of adequate edible vegetation in the forests that are badly invaded by invasive species like Lantana Camara and Senna Spectabilis is forcing animals into human habitations.

Degraded forests have a major impact in climatic conditions. The temperature in a regular non-degraded forest will be lower by several degrees. A restored forest is therefore the prescription to fight against global warming.

Invasive species is a major issue in many wildlife sanctuaries in India. Some of the most prevalent invasive species in dry deciduous forests are Lantana Camara, Chromolaena odorata, Senna (earlier classified under Cassia) Spectabilis and Parthenium hysterophorus.

Most of these invasive species are exotic species that have come into the country either accidentally or brought as ornamental plants. For example, Lantana Camara was brought to India by the British around 1805 from South America as an ornamental plant and has since then spread across the country.

Lantana Camara is the biggest threat and has invaded 40-60% of many forest areas in the Nilgiris Biosphere including protected areas and tiger reserves. As a result while protected areas are physically cordoned off they are not ecologically protected.

Invasive weeds push out native species of vegetation and prevent fresh growth of native vegetation. For example, in most parts of Bandipur bamboo re-appearance is very low because of the domination by Lantana. This severely affects food availability for elephants which depend on a multi-floral diet.

The restoration work is carried in collaboration with village communities living near the forests. This provides them valuable alternate livelihoods and in turn fosters a win-win relationship between them and the ecology. In the short term this creates an economic reward for conservation, in medium term these communities start demonstrating stewardship towards forests. This is the larger benefit. Further degradation can be avoided and custodianship can be secured.

Junglescapes works in close collaboration with Forest Department and its objective is to strengthen the hands of the Department in reversing degradation and also manage human-animal conflicts.

The involvement of local communities in restoration efforts is important as the task is huge. These communities live at the edge of the forest and hence are in the best position to carry out restoration activities. 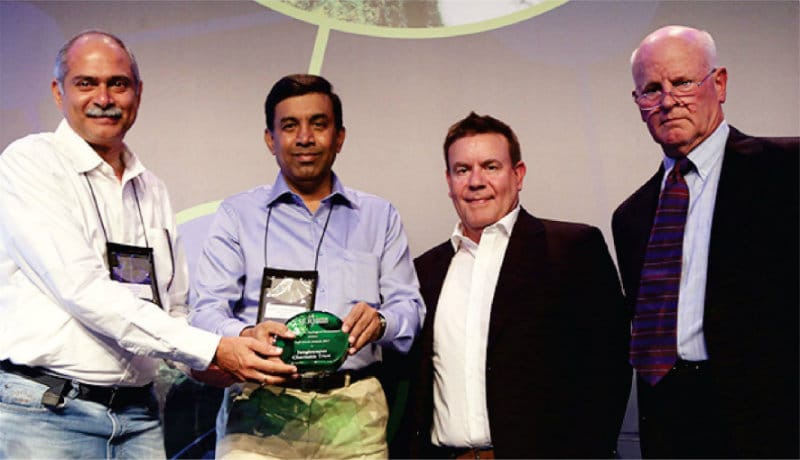 Rtn. C. R. Hanumanth (extreme left) of Mysuru, who is a Committee Member of Junglescapes NGO, seen receiving the SER Award along with Ramesh Venkataraman, Founder and Trustee, Junglescapes, from Alan Unwin, Chair, Board of Directors, SER and Jim Furnish, Chair, Awards Committee at the SER Global Restoration Conference in Brazil.

They have over 80-90 native species of smaller vegetation like shrubs and creepers. So after restoration, there is a 3-fold increase in biodiversity. Restoration supports a wide variety of fauna too.

Junglescapes achieved the above mostly through passive restoration methods and by re-building the resilience of ecosystem. These passive methods are low-cost, easy to implement by local community members and based on strong science. The methods also focus on generating alternative livelihoods and incomes for local population.

Special care is taken to ensure an ecosystem is restored to the same type of ecosystem as what it was originally. The use of passive methods helps ensure that the intervention is kept to the minimum and all species are native to the ecosystem. Passive methods involve actions towards improving the soil quality, increasing moisture levels, creating the right environment for pioneer species to establish, removing invasive weeds, etc.

Junglescapes uses the cut-rootstock method developed by the Centre for Environmental Monitoring of Degraded Ecosystems, Delhi which is a Centre of Excellence of the Ministry of Environment and Forests. This method has been deployed successfully in Corbett Tiger Reserve and large areas invaded by Lantana have been restored.

The rootstock of the Lantana is manually cut 2-3 inches below the soil. This prevents the weed from regenerating. In this method, dormant seeds under the soil are left undisturbed. Traditional methods like grubbing with JCBs or burning are dangerous as thousands of dormant Lantana seeds that are lying beneath the soil are disturbed and they break their dormancy and germinate. This accelerates growth of Lantana to two or three-fold more than previously. 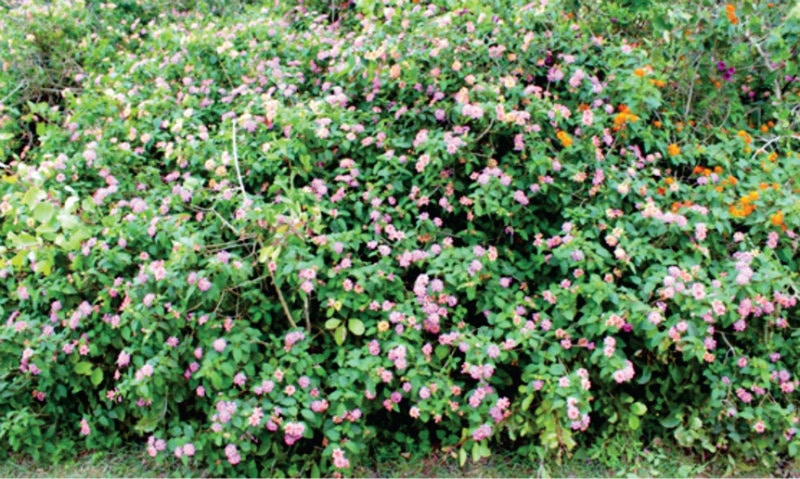 Restoration of plots after removal of Lantana is crucial as otherwise the place may be invaded by secondary weeds.

This reiterates the importance of having scientifically validated protocols for managing such invasive weeds. This also demonstrates that the Lantana problem can be tackled if there is a planned approach and willingness, and funding, to sustain the restoration for 10-15 years.

Most of the community members participating in the restoration effort are from indigenous communities like Jenu Kurubas and Soligas. They were previously engaged mostly in farm labour in nearby farms. This work is seasonal and averages 10 days a month giving them incomes of Rs. 2,000 – 2,500 a month over the year.

The restoration effort is carried out throughout the year and these community members get a livelihood of around Rs. 6,500 each per month. This has led to significant improvement in the quality of life of their families.

Traditional method of cooking on open stoves consumes 15 kgs of firewood a day per household.  Junglescapes has implemented the low smoke chulha (Stove) in over 400 households. These chulhas consume just 5 kgs of firewood a day. This means a saving of almost 3.7 tonnes a year per home. This helps significantly in reducing firewood pressure on the forest.

Lantana craft: Villagers surrounding the forests are trained by Junglescapes in making craft items from Lantana. The Lantana that is removed scientifically is transported to the craft centre.

Junglescapes has helped them form a Self-Help Group (SHG) named Lokkare Mahila Lantana Karakushala Sangha. The current President of the SHG is Mahadevamma and the Vice-President is Javaramma. They hold meetings of the SHG and repay their loans promptly. This has developed their ability for self-governance.

Junglescapes has recently been successful in the creation of another SHG called Bandipur Kadu Samrakshana Samiti. This is a step towards leadership and ownership of the restored forests by the local people.