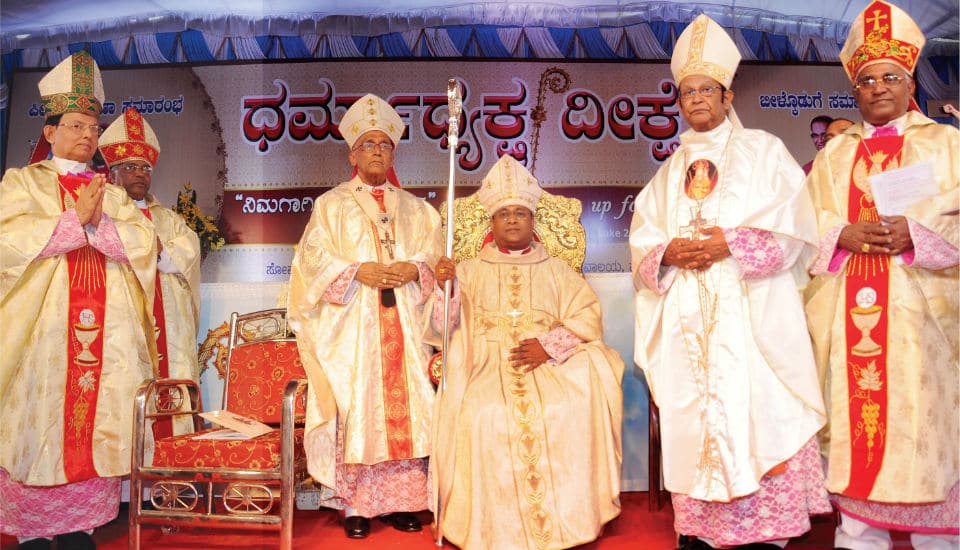 Rev. Msgr. K.A. William, who was appointed as the seventh Bishop of Mysore Diocese by Pope Francis at Vatican on Jan. 25, 2017, was formally consecrated as the Bishop amidst singing of hymns by the Church Choir and reading of verses from the Holy Bible at a religious ceremony held at St. Philomena’s Church premises here yesterday which coincided with his (Rev. William) 52nd birthday.

The venue was jam-packed with devotees, priests, nuns and the public from Chamarajanagar, Mandya, Kodagu and other parts of the State, numbering more than 5,000,  to witness the Episcopal Ordination and Installation ceremony. Three huge LED screens were put up at the venue for the gathering to witness the event.

With the Church being one of the major tourist attractions in city and with large number of people thronging the venue to witness the event, the City Police had provided elaborate security by installing a door-frame metal detector at the entrance gate of the Church.

Rev. K.A. William’s chosen motto for the consecration was ‘Given up for you’ from St. Luke’s Gospel. 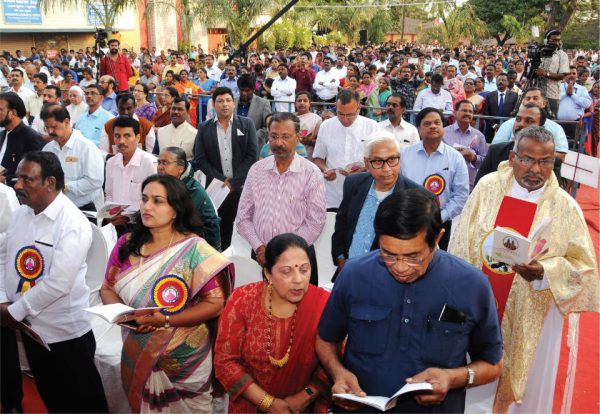 Before the consecration ceremony commenced, the appointment letter from Pope Francis, written in Latin language, was translated to Kannada and read by Rev. Mari Joseph, who also gave a brief introduction of Rev. William to the gathering after which the religious ceremony began lasting for more than three hours.

Archbishop of Bangalore Arch-Diocese Most Rev. Dr. Bernard Moras, who congratulated Rev. William on being appointed as the Bishop of Mysore Diocese, briefed him (Rev. William) of his responsibilities as the Bishop and also about the ceremony.

He said that the Bishop should love the Church and dedicate his life for the benefit of people and extend his services to the people of all religions.

Rev. William took the religious oath before he was consecrated as the Bishop by Chief Consecrator and former Bishop of Mysore, Rev. Dr. Thomas Antony Vazhapilly.

Rev. Thomas A. Vazhapilly administered the oath and performed all the religious customs such as placing of Holy Bible over the head of the new Bishop, putting the holy ring and placing the ceremonial headgear besides anointing Rev. William with holy oil.