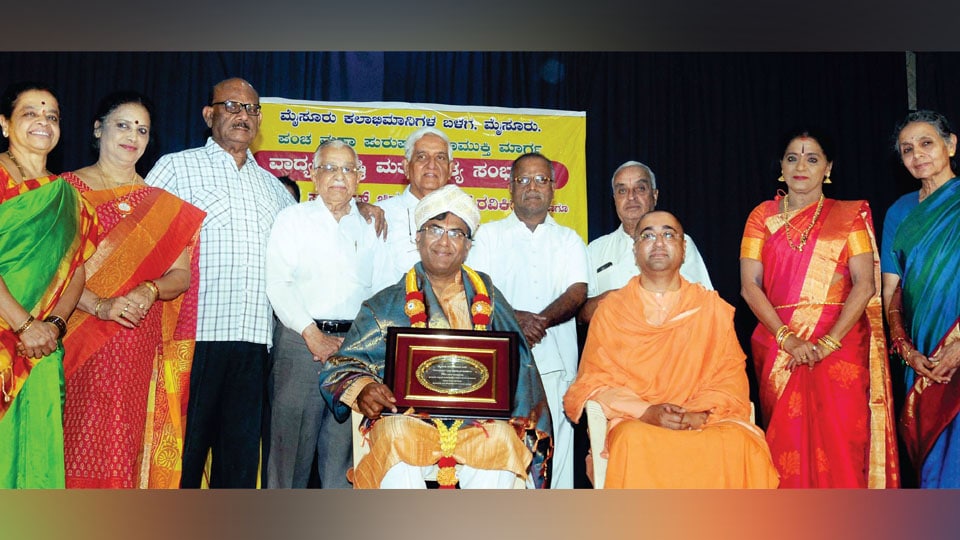 In collaboration with Kalabhimanigala Balaga, Mysuru, Sri Nadabrahma Sangeetha Sabha had organised a special programme on the occasion of 50th birthday of Chitravina N. Ravikiran. The programme was titled ‘Pancha Maha Purushara Paramukti Marga – Vadya Goshti Mattu Nritya Sambhashane,’ a rare event, wherein Sri Tyagaraja, Muttuswami Deekshitar, Shyama Shastri, Purandaradasa and Oottukkadu Venkata Subbiah were remembered through a composition each through Ravikiran’s music and Smita Madhav’s dance. Ravikiran was accompanied on violin by his disciple Apporva Krishna and on mridanga by B.C. Manjunath. Many Sangeetha Sabhas in Mysuru came together to felicitate Ravikiran on the occasion.

Ravikiran is known more to ‘sing’ through his Chitravina than to play. His instrument produces such elegant gamakas as found rare even in Vocal music. He began the concert with ‘Sarasuda’ varna in Saveri set to Adi Tala. In the Nata composition ‘Jaya Jaya Jaya Janaki Kanta,’ Ravikiran played a short tana prior to the composition and Smita made her entry in the composition. 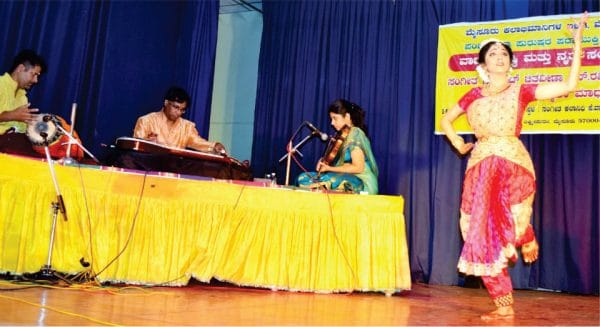 Chitravina N. Ravikiran, accompanied by on violin by his disciple Apporva Krishna and on mridanga by B.C. Manjunath, presenting a music recital as Smita Madhav performs.

The surprising and most interesting part of her dance was dancing to the kalpana swaras that Ravikiran offered to the devaranama.  Obviously the kalpana swaras were spontaneous and the way the dancer blended her moves to the spontaneous music was amazing. It was obvious the dancer was also well-versed in music. Tyagaraja’s ‘Brova Bharama’ in Bahudari was a simple presentation by Ravikiran alone but the next composition, which was the third Sapta Ratna Kriti of Oottukkadu Kavi was handled in detail. Kalyani ragalapana was great in Chitravina with chaste gamakas, wherein the dancer could give vent to her abhinaya, which was introductory to the composition about Radha, whose name does not appear till the charanam of the kriti. Both the music and dance were so excellent that the audience often wondered if they should close their eyes and enjoy the music or keep their eyes open to enjoy the dance.

Shyama Shastri’s ‘Marivere Gati Evvaramma’ in Anandabhairavi was presented by Ravikiran with grace. The other main item of the evening was Kambhoji, the ragalapana of which was an excellent rendition not only by the main artiste but also by the violinist Apoorva. Smita joined with the beginning of the composition, before which she explained the story of Bhasmasura that she developed for elaboration at the charana — ‘Kroora Daityadi Brundha Mardanim’ Narration along with visuals helped the audience understand the context of the composition. A touching portrayal of the composition and Smita’s timing with the lyrics of the composition brought her huge applause from the audience. B.C. Manjunath on the mridanga elevated the standard of the concert with his delicate touches and timely strokes.

Given that both the music and dance were highly enjoyable, the audience remained unsatisfied at times as there was no vocal music to support the dance and most of the sahitya, especially those with Venkata Kavi was unfamiliar and therefore a gap was often formed between the dance and the audience.