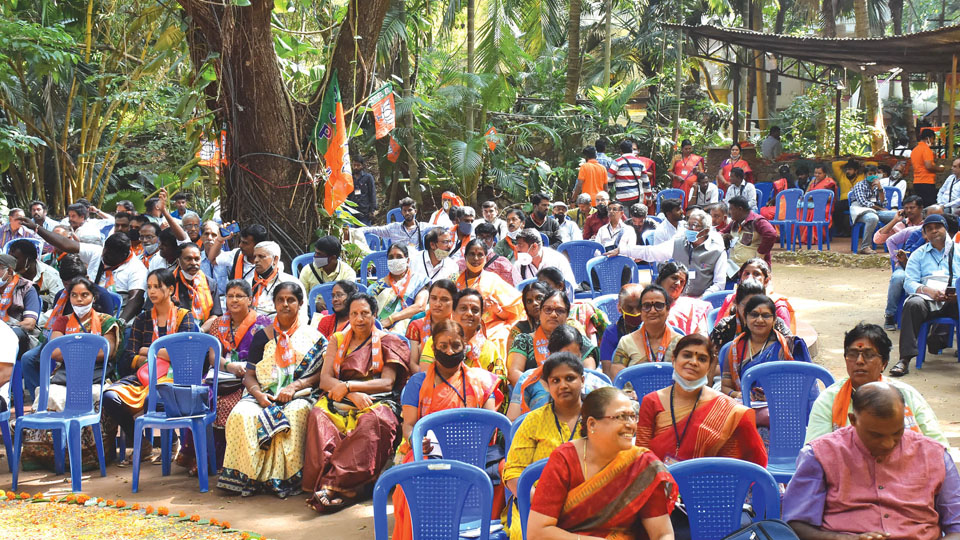 He was speaking after inaugurating one-day workshop for booth-level Presidents of Krishnaraja Constituency at a resort on Manandawadi Road in city recently.

Ramdas said that booth-level Presidents play a vital role in a cadre-based party like BJP. Their service during COVID-19 by going to every house in the Constituency to instill confidence among the people was noteworthy. Everyone must unite and involve in nation building, he added.

Mysuru City (District) BJP In-Charge, Hirendra Sha said they were seeing the achievements of BJP in the country and reason for this had been a clarion call given by Prime Minister Narendra Modi by coining a slogan “Mera Booth Sab Se Mazbooth.” When BJP (formerly Jan Sangh) was founded, it did not have party workers to sit near polling booths. Now, the party has grown so much that there was no dearth of workers in any given Constituency across the country. This became possible because of workers in grassroots level. In previous Assembly elections, they had elected BJP candidate by a margin of over 25,000 votes and in the coming days the victory margin should be double. Each booth-level President must assume himself as “I am Prime Minister and I am MLA” and function in the Constituency, he noted.

Dr. Achyuth Rao, Head of Rise Foundation, said the Modi Government had given 183 programs in the last six years and it was the duty of booth-level Presidents to take this program to every house in their Constituency. They need to talk, interact and discuss with general public in their area to tell the achievements of PM Modi. According to an estimate, around 15 per cent of Aadhaar Card distributed to people have mistakes in name, address, date of birth or others that need to be corrected by holding special camps in the Constituency. The cards with discrepancies must be taken to Tahsildars or Deputy Commissioner and get it corrected to win their hearts. At the same time, around 42 per cent the ineligible people was having Below Poverty Line (BPL) cards and they must be identified for deletion from the list of beneficiaries.