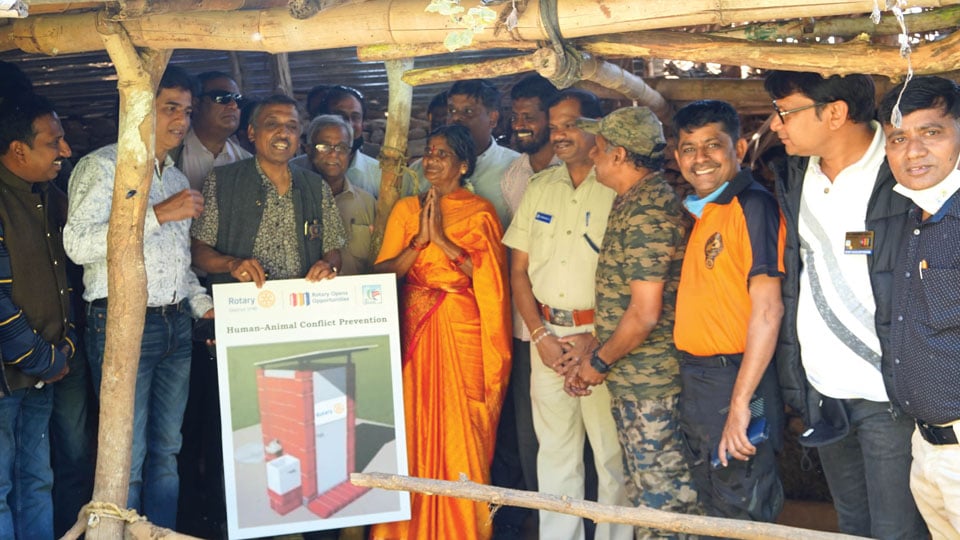 Speaking on the occasion, Nagendra Prasad and B.R. Sridhar of Rotary 3190 briefed about the intensity of the requirement of toilets especially in the fringe villages of Bandipur.

Daniel Sukumar Das and Sagaravaghan, Directors of WCF spoke on how this initiative would help contain wildlife conflict and bring a change in the motives of people who have been attacked by leopards and tigers while answering nature’s call. They said that a wild animal gets confused on seeing a human squatting on the ground and assuming the human to be a prey like a deer or smaller mammals, tend to attack the humans. This attracts conflicts between man and animal and a permanent solution to it was to build a toilet in their own house, they added.

They said that the primary intention of containing wildlife conflict is in the interest of saving wildlife species by making stakeholders themselves participate in the process and by directly helping them to build their revenue using their own resource and percolating the same to save wildlife.

They further said that they would help villagers by providing community based solar fence, which would create a win-win situation for both people and wildlife and establish a community of environment conscious citizens. Constructing predator-free cattle sheds will help contain conflict with big cats that stray outside the forest and become enemies. Revenge killing finds its way resulting in loss of tigers and leopards for this.

READ ALSO  Captive breeding: T-80 to be paired with Durgi

Pointing out that open field defecation is unhygienic and also dangerous in high pressure conflict areas where incidents of tiger and leopards killing people are on the rise, they said that by providing proper toilets such man-animal conflicts can be prevented