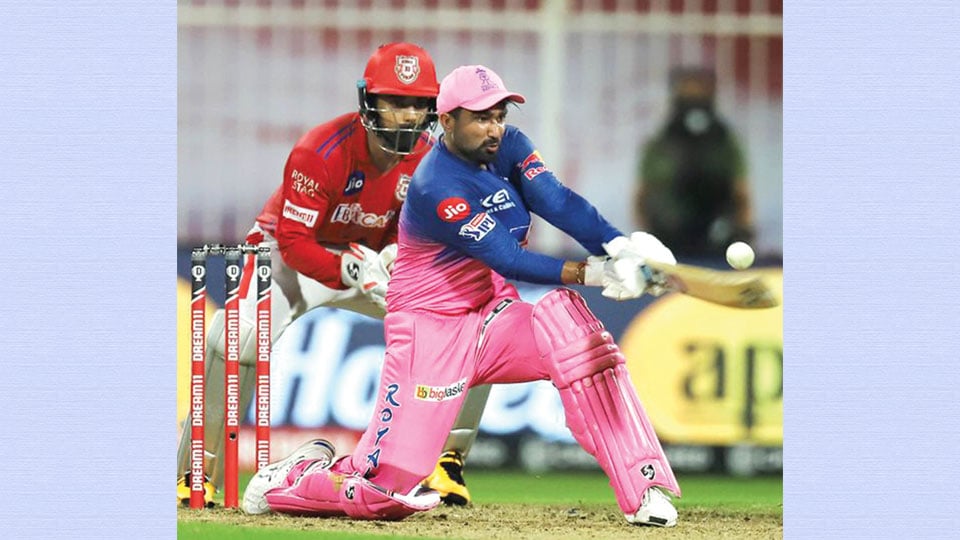 Sharjah: Rajasthan Royals (RR) created a record for the highest successful run-chase in the IPL history as they beat Kings XI Punjab (KXIP) by four wickets in the ninth match of IPL 2020 here yesterday.

Put into bat, KXIP were off to a flying start as Mayank Agarwal and K.L. Rahul pretty much matched one another shot for shot. The two good friends were in for some fun and it was RR who wore the brunt of it as KXIP marched towards sixty at the end of powerplay, with Mayank and Rahul scoring 29 and 26 runs, respectively. Mandatory powerplay was over, but that did not deter either as KXIP continued to score at a rapid pace. While Mayank got a reprieve in the seventh over despite a fine fielding effort from Riyan Parag near the boundary rope, the KXIP opener continued to attack, hitting 2 sixes and a four in next over bowled by Rahul Tewatia.

The merry ways continued for Mayank as he then went after his Karnataka teammate — Shreyas Gopal — in the ninth over, slamming two sixes to bring up his fifty and team’s hundred.

While Rahul completed his fifty in the 12th over, Mayank had moved past 80. The two, then completed the 150-run stand in the 14th over.

Mayank, who had scored 89 during KXIP’s first game against Delhi Capitals, then completed his first IPL ton, hitting the final delivery of the 15th over for four.

RR, though managed to stop the Mayank-Rahul juggernaut over the course of the next three overs. While Tom Curran dismissed Mayank after his 50-ball 106-run knock, which included 10 fours and 7 sixes, Ankit Rajpoot got Rahul out for 69 on the final ball of the 18th over.

However, RR still managed to score 29 off the last two overs as Nicholas Pooran scoring 25* off 8 and Glenn Maxwell scoring 13* off 9 balls to take KXIP to 223/2, which now is the highest team score in the IPL 2020.

With 224 runs to win, RR needed a blistering start and skipper Steve Smith did not waste any time to get going as he hit two fours in the first over of the chase. But KXIP managed to dismiss Jos Buttler in the third over as Sarfaraz Khan took a good low catch off Sheldon Cottrell. Sanju Samson then joined Smith in the middle, and the pair continued from where they had left in the first game against Chennai Super Kings.

Sanju Samson needed no sighters whatsoever as he creamed the first legal delivery that he played for a six before hitting the third ball he faced for a four. Smith, then, hit Mohammad Shami for a six and a four in the fourth over.

KXIP introduced Ravi Bishnoi into the attack in the fifth over and Sanju Samson hit him for a six and a four to push RR past fifty.

Smith brought up his second successive fifty of IPL 2020 in the ninth over but lost his wicket in the same over.

Rahul Tewatia then joined Sanju Samson in the middle. While Sanju Samson moved past fifty, KXIP managed to keep things tight, conceding just 21 runs in the next four overs.

Sanju Samson and Tewatia then hit a six each in the two overs, but RR still needed something extraordinary to push themselves past the finish line, and Sanju Samson opened the floodgates, hitting Maxwell for three sixes in the 16th over. But he departed in the 17th over after scoring 85 off 42 balls, hitting 4 fours and 7 sixes.

By the end of the 17th over, Tewatia was batting on 17 off 23 balls and RR needed a miracle to score 51 off last three overs. But then, Tewatia changed the gears and how. He went after Cottrell and creamed as many as five sixes to move to 47 off 29 balls and brought the target down to 21 off 2 overs.

While Shami got Robin Uthappa out on the first ball of the penultimate over, Jofra Archer hammered two sixes off the next two deliveries before Tewatia hit one more to notch up his fifty, bringing bring down the winning target to two runs. Although he got out on the final ball of the 19th over and Murugan Ashwin bowled a dot and took a wicket off Riyan Parag, Curran hit a four on the third ball of the final over to seal a sensational RR win.