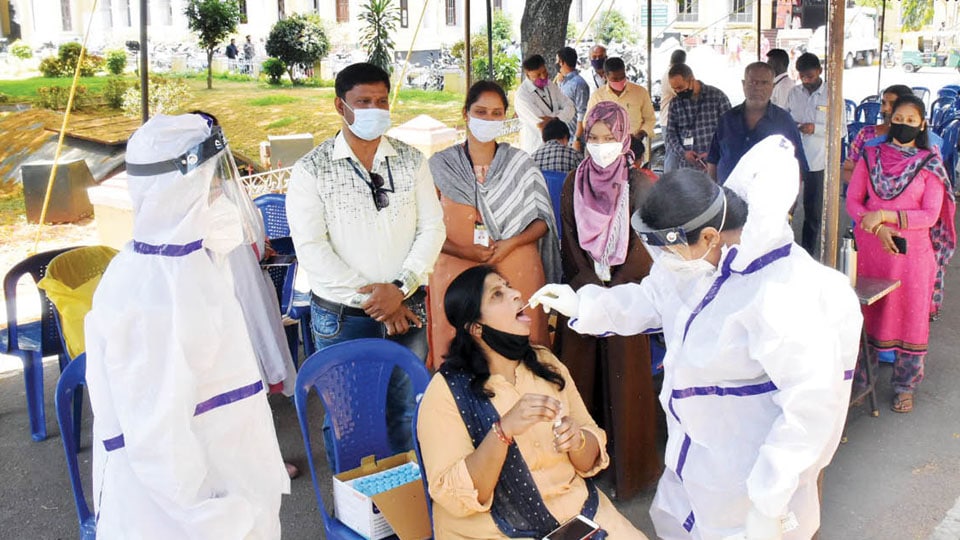 Mysore/Mysuru: A total of 194 out of 3,373 employees of Mysuru City Corporation (MCC) underwent RT-PCR test at MCC premises here on Monday.

MCC Commissioner Shilpa Nag had asked the staff of all nine MCC Zones to mandatorily undergo RT-PCR test after a few staff, Mayor and few Corporators tested positive for COVID-19.

Though only 30 staff underwent the test till 12.30 pm, a total of 194 staff gave their swab samples till 4 pm yesterday. As the health staff have to conduct tests at various places across the city including at Town Hall and Dufferin Clock Tower, the MCC Commissioner had urged all the staff to get themselves tested at various RT-PCR testing centres in city without fail.

It was shocking to note that the MCC staff, who have been creating awareness about steps to be taken to prevent the spread of Coronavirus by wearing face mask, maintaining social distancing, washing hands frequently and take vaccine to boost immunity, were themselves hesitant to undergo the tests. It is to be known how many will undergo the mandatory RT-PCR test as instructed by the MCC Commissioner.