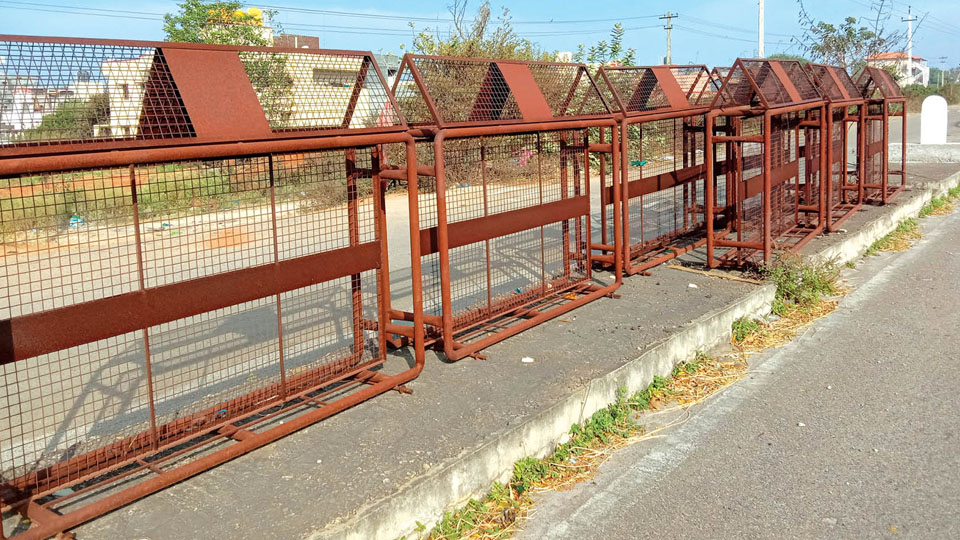 Rust In Peace: Public outcry against negligence of Police Department

Mysore/Mysuru: A dozen metal barricades, reportedly belonging to the Police Department, are left on the Ring Road to rust inviting wrath of public, who have accused the Police Department of wasting tax-payers’ money. These metal barricades are found on the roadside near Adarsh Nagar on Dattagalli Ring Road route since many months. These 12 iron barricades are not painted and are exposed to vagaries on nature.

A resident, who has sent the photos of the rusting barricades, said that these barricades were either purchased or donated and it is the responsibility of the Police Department to maintain it. But the barricades are left neglected. Though the Highway Patrol Police vehicle conducts regular beat on this road, has this not come to the notice of the Highway patrolling party?  he questioned.

Another resident opined that the iron barricades could be used for many years if a fresh coat of metal primer and paint is applied.

When the matter was brought to the notice of DCP (Crime and Traffic) M.S. Geetha Prasanna, she said that the barricades kept on the roadside had not come to her notice and added that she would instruct the jurisdictional Traffic Police to take them.