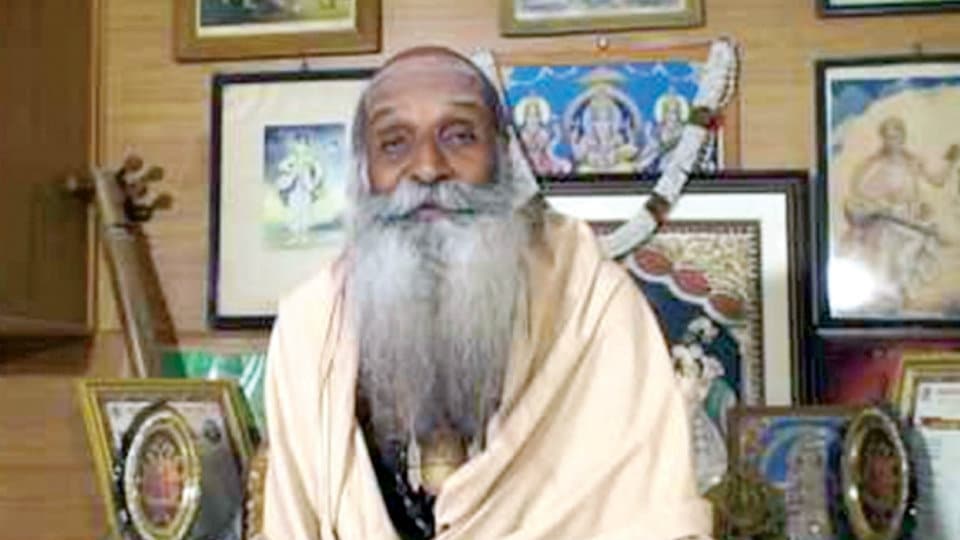 From time immemorial our country is famous for Saints of various religious denominations. To them these denominations did not matter because they were all speaking the same language incorporating the good of the society, which is generally known by the broad name Dharma. Under this background, we have to understand the life and teachings of Saint Nijaguna Shivayogi.

As is the case with most of our Saints, the authentic details of the early life of Nijaguna Shivayogi are not known. It is said that he was a chief of the area known as Shambhulinga Hill situated in Kollegal taluk. The Hill is also known as Chilakavadi and is about 6 kms from Kollegal town. As a chief of this area, Nijaguna ruled over this Chiefdom in a dharmic way and the subjects admired him and hailed him as an ideal Chief.

After years of administration, Nijaguna felt that the Chiefdom he was ruling was temporary and can be taken away by another enemy chief. This realisation made him think of a state of permanent nature. He left the Chiefdom and all the luxury of it and became a Saint and did meditation on the Shambhulinga Hill. After a couple of years of meditation, he got the enlightenment under the guidance of his Guru Shambhulinga Swamy and became famous as a Saint subsequently.

According to another version, Nijaguna belonged to Sonda or Swadi kingdom. This area was famous for devotion to Shaivism as testified to by many Shaiva temples and Shaiva Mutts of great antiquity. In fact, many Shaiva Saints migrated to this kingdom to practice their religion without any hindrance because it provided a congenial atmosphere for them. In that area there was a town called Budikeripattana. This Mutt had Sri Bhujangaswamy as its head. He was well-versed in Shaiva philosophy. Daily there used to be discourses and discussions. It almost looked like a mini-Shaiva University during its heydays.

It was the desire of young Nijaguna to join this Ashrama and take guidance from this great Saint and also serve the Ashrama. When Nijaguna approached the great Swamiji, he did not permit him to the Mutt without ascertaining whether he is fit or not. As Nijaguna was a Chief, can he adapt himself to the rigorous way of life of a monk leaving aside all the luxuries of this world. Though he was a Chief he was asked to serve the Mutt as a servant by washing clothes and cleaning the vessels. Nijaguna performed all these errands in the spirit of ‘work is worship’ and the Swamiji was pleased and thought that Nijaguna is fit to be ordained as a monk. He finished his education there to the satisfaction of the Swamiji and requested permission to return to his place to serve them. With the blessings of the Swamiji, Nijaguna returned to the town of Shambhulingapattana and began his normal life.

READ ALSO  Prof. AVN to be feted at Kannada Sammelana on Nov. 25

There was a demoness in that hill-town who was tormenting the good people there. She began troubling Nijaguna also. One day she came to Nijaguna and began troubling him. As Nijaguna was in the middle of the worship of Shiva, he requested her to wait till he finished the worship. Thus she troubled Nijaguna for over fifteen years and ultimately she thought that she could no longer disturb him. Finally, she was permitted to live on the slope of the Shambhulinga Hill. Devotees even today visit her in the Durgimantapa where she last resided.

In the meantime, he met another Veerasaiva Saint Muppina Shadakshari and both of them went to meet their preceptor. People laughed at Nijaguna and taunted and gave him molten iron and asked him to drink it. Nijaguna gulped it as if it was fruit juice. People got scared and apologised to him. Then in the night he halted in a cave and asked a tiger there to keep a watch. During this period he began preaching the tenets of Shaiva Philosophy. Thinking that his aim and purpose were fulfilled, he entered into Shivayoga Samadhi and became one with the eternal.

Saint Nijaguna wrote many works in Sanskrit and Kannada explaining the devotion to Shiva and ethical principles of life. His two Sanskrit works by name Darshanasara and Atmataraka Chintamani are not available. However, his seven Kannada works such as Kaivalya Paddhatir, Anubhavasara, Vivekachintamani, Paramarthageethe etc., that are fortunately available throw great light on his religious teaching and are considered of seminal importance for Veerasaivism. The idols of the Saints of this tradition can be seen in the Nanjundeswara temple at Nanjangud also.

The teachings of Nijaguna are simple. In fact, Vedantic philosophy which most people cannot understand has been simplified and couched in simple language so that people can follow it. Mind is most important for the human beings and hence this has to be kept pure like a crystal. In the pursuit of luxuries, man is going in a tangent way to the divinity. Unless you go closer to the divinity, you cannot improve yourself or serve the society. Hence to achieve this goal, one should not or need not go to the forest, but it can be achieved in the midst of the people. Thus mind should be harnessed first. Hence, prayers are required to stop this wandering of the mind.

This is not easy. Our ancient teachers experimented with all these practices and realised the truth and have given us their fruits of labour. In this context, it can be called Shivayoga though it is philosophical in nature. Common men require a symbol and hence Shivalinga is recommended. The work Paramartha Prakashike deals with yoga. His other work Anubhavasara gives us in a simple language the gist of ten Upanishads in Kannada. The work Paramanubhavabodhe deals with the conversation between Yajnavalkya and Maitreyi. From all these qualities of head and heart, Nijaguna Shivayogi has become closer to us. People who are interested to know more about this Saint should read the book Nijaguna Shivayogi written by a great scholar H. Gangadharan, Mysore University, Prasaranga Publication, No.149, II edition 1992. This note is based upon this book.