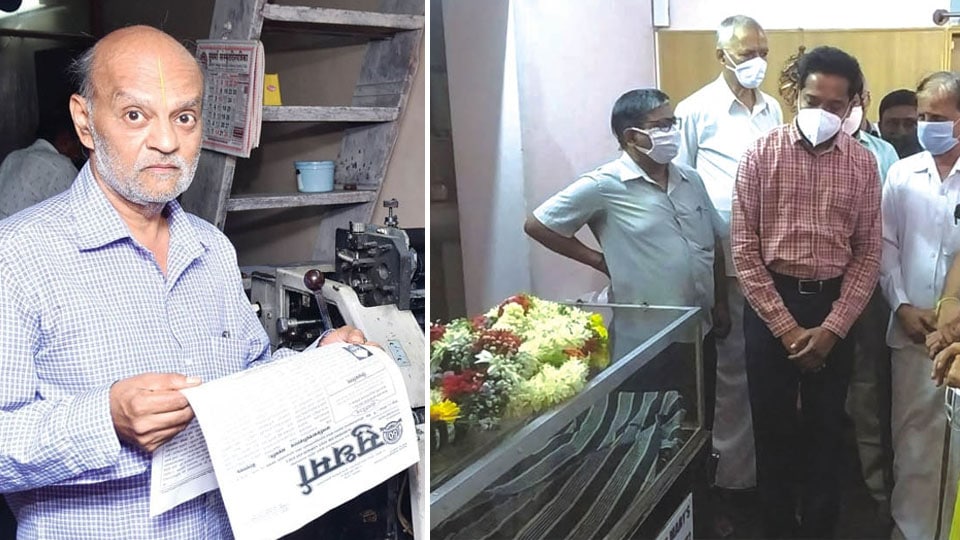 Condolences pour in from all quarters; last rites performed with State honours

Mysore/Mysuru: Condolences poured in from all quarters including from the Prime Minister’s Office following the demise of K.V. Sampath Kumar, Managing Editor of Sudharma, reckoned to be the country’s and the world’s only Sanskrit daily — a language that celebrates India’s rich culture, tradition and civilisation.

Sixty-four-year-old Sampath Kumar passed away in the city yesterday afternoon following a massive cardiac arrest. He was at work, arranging the news items to be published in the next daily edition of the newspaper that had a huge fan following. He leaves behind his wife Vidushi K.S. Jayalakshmi and many relatives and fans.

Last rites were performed at the foot of Chamundi Hill yesterday evening with State honours. Reserve Police personnel fired three rounds in the air as a mark of respect to the departed scribe.

Soon after the news of the death broke, MLA S.A. Ramdas, Deputy Commissioner Dr. Bagadi Gautham and MUDA Chairman H.V. Rajeev rushed to Sampath’s office-cum-house in Agrahara to have a last glimpse of the man behind Sudharma. His media colleagues including Mysuru District Journalists Association President S.T. Ravikumar, past Presidents C.K. Mahendra and K. Deepak too paid their last respects.

Many awards from city and State had come Sampath Kumar’s way for running the newspaper non-stop with dedication in the face of all adversities. He along with his wife Vidushi Jayalakshmi were selected for the Padma Shri in 2020 by the Centre and unfortunately, Sampath Kumar passed away before physically accepting the award from the President of India.

The print edition, a tabloid in five columns and comprising four pages, had a subscribers base of nearly 4,000 readers, mostly from various Sanskrit Universities and institutions across India, while the digital edition had a wider footprint. The e-paper is accessed by Sanskrit-lovers in more than 90 countries.

Sudharma was quite popular in mainstream journalism covering politics, entertainment, society, accidents, features, sports news and even crime. It included everything that a normal newspaper publishes. It used to publish model question papers just before the examinations of schools in Karnataka, Pre-University and degree programmes.

The newspaper’s endeavour was to bring Sanskrit closer to the common man who can read Devanagari script and had the basic knowledge of Sanskrit. On September 12, 2019, Star of Mysore had published a feature on Sudharma and the people behind it under the title ‘Passion for Sanskrit drives Sudharma.’

In his 10th session of Kaun Banega Crorepati  TV Show, host actor Amitabh Bachchan had asked a participant: “What is the name of the world’s only Sanskrit daily published since 1970?”

Condoling his death, Prime Minister Narendra Modi tweeted, “Shri K.V. Sampath Kumar Ji was an inspiring personality, who worked tirelessly towards preserving and popularising Sanskrit, specially among youngsters. His passion and determination were inspiring. Saddened by his demise. Condolences to his family and admirers. Om Shanti.”

Union Home Minister Amit Shah condoled Sampath Kumar’s demise in Sanskrit. He said, “Sampath had devoted his life for the preservation and promotion of Sanskrit language. His contribution in making Sanskrit a spoken language can never be forgotten. His death is a great loss to Sanskrit and journalism. May God bless the departed soul. Om Shanti.”

K. Vijaya Kumar, former Joint Director, Information and Publicity,  said: “So much saddened at his sudden death as he was in touch with me for an article on his late father Varadaraja Iyengar whose Birth Centenary he was planning in September. I had sent it only day before by Speed Post which he couldn’t open and read yesterday when he suddenly collapsed. May his soul rest in peace.”

Following Sampath Kumar’s passing away, yesterday’s newspaper was only partially distributed in the city and the postal dispatch was fully disrupted. However, the printing will not stop today and the editions will continue as usual without any break, Sampath Kumar’s wife Jayalakshmi told SOM.